Living with leukemia, one day at a time | Montreal Children's Hospital

Living with leukemia, one day at a time 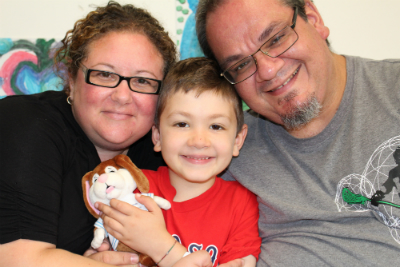 Thanks to advances in research, medicine and technology 5-year-old Sebastian’s future looks bright

Just like many little boys his age, Sebastian De Marco, is a curious and active 5-year-old. But in April 2013, his parents, Janey and Pat De Marco, noticed their usually animated son seemed different.

“I remember thinking that his colour was a little off,” says his mother, Janey, “and that he seemed to be dealing with a cold.” Earlier that same week, Janey had learned of an incident at daycare when Sebastian nearly fainted. “He just didn’t seem right, so I brought him to the clinic near our house,” she explains.

Sebastian’s pediatrician performed a physical exam that raised some red flags. “He immediately noticed my son’s spleen was enlarged, and was worried about him looking so pale,” say Janey. Concerned and recommending Sebastian get further evaluation, he referred Janey and her son to the Children’s Emergency Department (ED).

What followed next still seems like a blur to Janey and her husband, Pat. Staff in the ED examined Sebastian, gathered blood samples and asked a myriad of questions: did he ever have cold sweats? Was he especially prone to bruising in the short term past? Did he have a fever recently?

“I was shocked. Never in a million years would I have thought we could be dealing with this. It was terrifying, devastating and overwhelming all at the same time,” says Janey.

Childhood acute lymphoblastic leukemia, also called ALL or acute lymphocytic leukemia is a type of cancer that affects the body's white blood cells (WBCs). Normally, these cells help fight infection and protect the body against disease. But in leukemia, these cells turn cancerous and multiply when they shouldn't, resulting in too many abnormal WBCs. This can then interfere with the body’s ability to fight infection.

Before her son’s diagnosis, Janey admits that she and her husband knew very little about the disease, and feared their son had just been given a death sentence. “All I knew was that leukemia was a blood cancer and that people sometimes died from it. I just wanted to know my son was going to be alright,” says Janey.

Fortunately, thanks to major advances in research, medicine and technology, the De Marco family learned that the cure rate for patients like Sebastian is very promising. “We met with Fatima, Sebastian’s nurse in the Hematology-Oncology Department, and she explained everything to us. She encouraged us to ask questions and really helped us to start thinking about the condition in a positive way.”

Despite the fact that Sebastian’s treatment has involved chemotherapy, an immeasurable number of medications and frequent hospital visits, the De Marcos do their best to ensure that their son and their twin daughters, who are 2 years old, stay connected with friends and family.

“We never really forget he’s sick, but it’s important to take a break from the disease,” says Janey. “Sebastian is still a regular kid, so we like to go to the park, go swimming, he likes to play video games and watch movies. We can do a lot more of that now.”

Much to his family’s delight, Sebastian is now in the maintenance phase of his treatment, which allows him a bit more time between visits to the hospital, which are scheduled once a month.

They hope to conclude his maintenance treatments, which last two-and-a-half years and enter the remission phase by July 2016. Until then, Janey says the family takes things one day at a time and focuses on keeping their son happy and engaged with other kids.

This summer, Sebastian was thrilled to return to daycare after having to remain isolated during his more intense treatments. This fall, he joined his peers in marking another exciting milestone in his life: his first day of kindergarten.