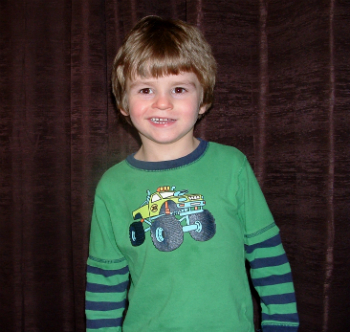 Imagine living with seizures so frequent, they happened every hour. Right before he underwent major brain surgery just over a year ago, 3-year old Cédric Gagnon’s epilepsy would cause him to seize anywhere from a few times a month, to numerous times a day when his condition deteriorated.

“We first discovered that Cédric had epilepsy when he was very young, after he underwent an MRI and a number of other tests that confirmed he was born with a cortical malformation,” says his dad, Claude Gagnon.

Cédric is followed closely in the Neurology Department by Dr. Myriam Srour, pediatric neurologist, who initially prescribed medication to control Cédric’s seizures. While the treatment worked well at first, over time, the seizures began to come back more frequently.

“It came to a point where many different things could trigger a seizure,” Claude explains, “a fever, irritability, and even fatigue could bring a seizure on, and he would suddenly start to tremble and shake during an episode.” Both Cédric’s dad and mom, Annik, took detailed records of when his seizures happened as a way to record the progression of his condition.

When it became clear that medication was no longer an effective treatment for his condition, Cédric was evaluated by Surgeon-in-Chief Dr. Jean-Pierre Farmer and his team to see if he would be a good candidate for surgery to help permanently control his seizures. In the spring of 2013, Cédric underwent a hemispherectomy, a surgical procedure that involves disabling one of the cerebral hemispheres, or half of the brain. In order to control his epilepsy, Dr. Farmer cut all the connections between the right and left side of the brain to prevent the damaged, epileptic side from affecting the more normally functioning side.

“Immediately after the surgery, the seizures stopped,” says Claude, adding his praise for Dr. Farmer and his dedicated team. However, one of the results of the complex surgery was that initially, Cédric was paralyzed on one side of his body, which the medical team made sure to address immediately with physiotherapy sessions, meetings with an occupational therapist and a number of follow-ups to ensure that Cédric would regain as much function on his left side as possible.

Today, his parents are happy to report that despite limited use of his left hand, he has made major strides in regaining function in the left side of his body over the past year.  Cédric just started walking a year ago and is now running and exploring things just like a regular kid,” says his dad. “We can’t thank Dr. Farmer, Dr. Srour and all the teams that helped us enough for their knowledge and constant support.”