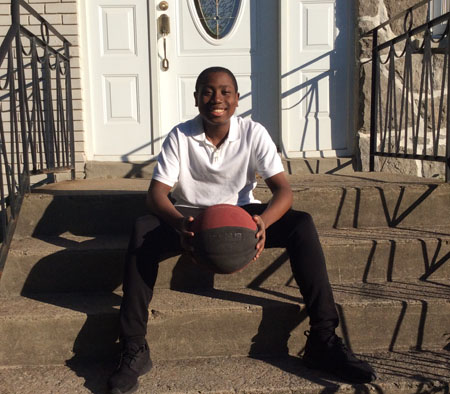 A nurse by profession, Assemyne had a basic understanding of what sickle cell anemia was, having worked with patients affected by the condition in the past. But she never thought of the possibility that it might one day touch her own life. So when her doctor ordered a test for the disease just a few months into her pregnancy with her son Florian in 2002, it came as a big surprise when the test returned positive.

“I knew was that kids born with sickle cell had a different quality of life, given that they had to manage a chronic illness and that it was a condition that was more common in the black community,” she explains. “But I had a lot more to learn. I was worried, but I was grateful to have found out right from the start and knew that I could take care of him.” Shortly after learning about her son’s diagnosis, Assemyne was referred to the Montreal Children’s Hospital’s Sickle Cell Clinic for further follow-up.

All in the red blood cells

Sickle cell anemia is an inherited blood disorder that affects a protein in red blood cells called hemoglobin. “In healthy people, these red blood cells are round and flexible. But in people with sickle cell disease, blood cells are irregularly shaped which can cause a range of health problems that can be serious if not properly managed,” explains Marie Gale, Florian’s nurse, who has followed him since birth.

Specifically, these cells in sickle cell patients can get stuck in small blood vessels, creating a blockage, which can impair blood flow and oxygen delivery to parts of the body. People with sickle cell disease might experience health complications because their blood isn't circulating through the body as well as it should. “The spleen, which normally acts as one of the body’s defense against infection, doesn’t function normally in patients with sickle cell disease.  Therefore, these patients have a higher chance of getting sick, so it’s really important that we follow them from as early an age as possible to minimize possible complications,” explains Marie.  “Pain is also a very common symptom of sickle cell disease, and the one that most people associate with the condition.”

A centre of expertise

The Montreal Children’s Hospital is one of four designated health centres in Quebec mandated to care for patients born with sickle cell disease, with a clinic that includes over 140 pediatric patients. Thanks to early testing, patients are now identified either before or right after birth and the clinic has seen consistent growth over the last few years. The benefits, says Marie, are numerous for patients. “We can begin the education about sickle cell disease right away, before the children have any issues related to the condition,” she explains, adding that some complications may be prevented.

Now 15 years old, Florian has learned how to manage his condition through close follow-up by Dr. Sharon Abish, pediatric hematologist, and Marie Gale, sickle cell nurse, as well as through consistent support from his mother, Assemyne. “I consider the team at the Children’s my second family,” he says, “I see them every 3 months and tell them how I’m feeling at school, how I’m managing with physical activity. Whenever I mention anything that’s causing me pain, I know they’ll be able to help me.”

Keeping up a healthy lifestyle and adapting to Florian’s needs is also a priority for Assemyne, who says she makes every effort to ensure her son’s environment is one that promotes healthy living. “We know that food is extremely important, and Marie gave us a list of foods to include more of in his diet. We make sure he’s eating nutritious things, continues to take his medication and that we keep the house warm, since his circulation is affected by his disease.”

While Florian has very few limitations, he has grown more and more aware of which physical activities tend to be more draining and difficult for him than others. “When he was younger, we tried swimming for a little while,” says Assemyne. “I quickly realized the temperature change would make him sick a lot more often, so we decided to try something else instead.” These days, Florian says he enjoys basketball, karate and reading comic books and has his sights set on one day enjoying a career in the medical field, given his experience as a patient. “I’d like to be able to give back to others,” he says, “and I also think my mom influenced me in my career choice. Watching her work hard has made me want to be like her.”