Matters of the heart: Mide's story 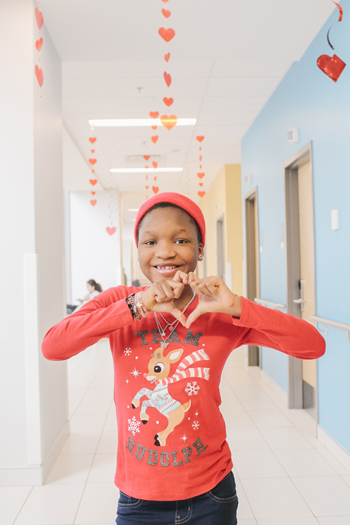 “She has developed and is not the small girl she looked like before - now she has changed.”

Paul Agbe constantly worried about his daughter Iyinmide’s health. The 12-year-old always seemed winded, struggling to catch her breath. Doctors in their native Nigeria couldn’t put a finger on it, suggesting polio might be the cause. It wasn’t until one week after the family’s arrival in Montreal in April 2018 that the Agbes finally understood why.

Doctors detected unusual activity from “Mide’s” heart and sent her to the Children’s Emergency Department (ED). Dr. Tíscar Cavallé-Garrido was the cardiologist on call that night and has followed Mide’s progress ever since.

“Mide presented with a very complicated case as not only her heart was malformed but also had an electrical problem. The malformation caused her heart to work as if it only had one pumping chamber instead of the normal two.  In addition, her electrical conduction system was blocked, meaning that the electricity was not flowing from the upper to lower chambers of the heart, resulting in a very slow resting heart rate ” says Dr. Cavallé, a pediatric cardiologist.

This electricity problem was fixed with the insertion of a pacemaker and the benefits have been immediate. Mide’s level of fatigue has decreased tremendously as her heart can now beat faster as needed during physical activity and in fact she has physically grown after years of failure to thrive.

Unfortunately, Mide’s heart malformation was not detected and therefore not operated on at birth. This has caused irreversible damage to her lung blood vessels and prevents her from being a candidate for corrective surgery. So while she can take part in more physical activities, she understands there will always be limitations to the physical exertion she is allowed to indulge in.

“There’s been great improvement in the months after her pacemaker surgery, she can walk a distance without getting tired like she did before,” says Paul. “She has even developed since then and is not the small girl she looked like before. She looked like a child and now she has changed.”