“I get so emotional thinking about it, but if it weren’t for the doctors, nurses and everyone who took care of us, he may not have made it,” says Robyn Schwartz about her third and youngest son Maxwell who is now 15 months old. At 20 weeks into her pregnancy, Robyn underwent a routine ultrasound that revealed her baby had a cystic malformation of the lung.

Congenital lung disease does not usually require fetal intervention but it is followed closely. Throughout her pregnancy, Robyn and her husband Martin got to know their care team well, a group made up of professionals from various adult and pediatric specialties. Before Maxwell was born, Dr. Thérèse Perreault, head of the Neonatal Intensive Care Unit (NICU) at the Montreal Children’s Hospital (MCH), gave the couple a tour of the unit to familiarize them with the environment. “Parents expecting a baby with fetal anomaly tend to be very anxious, so giving them a tour of the NICU gives them a better idea of what to expect once their child is born and can help temper some of the anxiety,” explains Dr. Perreault.

Maxwell was born in March 2016 in the OR at the Royal Victoria Hospital (RVH) where about half of all babies treated in the MCH NICU are born. “We work hard with the RVH to provide the best care to mothers and babies,” says Dr. Perreault. Maxwell was immediately transferred down the hall from the RVH birthing unit to the MCH NICU. “Dr. Perreault was ready for us,” adds Robyn, “and she was also there during the delivery.”

Although Maxwell was a seemingly healthy nine pound baby, an examination showed otherwise. “We imaged him the day after he was born,” explains Dr. Sherif Emil, Chief of Pediatric General and Thoracic Surgery at the MCH. “His x-ray was worrisome, and we were faced with a dilemma in terms of what to do.” In 80 to 90 percent of congenital cystic lung disease cases, the mass can be removed electively six to 12 months after the baby is born by thoracoscopic lung resection, a technique Dr. Emil introduced to the MCH in 2008. This technique allows these anomalies to be removed through small incisions instead of open chest surgery. However, Maxwell’s malformation was so large that it was pushing his trachea and heart to one side, meaning more urgent surgery had to be considered. 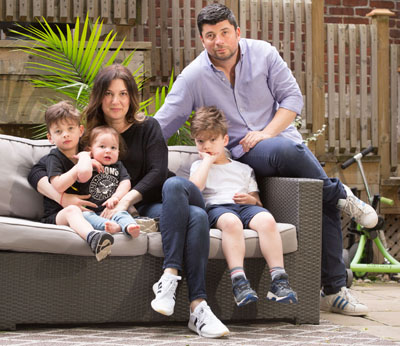 Dr. Emil was filling in for his colleague, Dr. Jean-Martin Laberge, a pediatric surgeon with extensive experience in congenital lung anomalies, who was away at the time of Maxwell’s birth. “I had never met Dr. Emil before but after he came to speak to us while I was recovering at the RVH we were reassured that Maxwell would be in good hands,” says Robyn. Dr. Emil had an open conversation with Robyn and Martin about their options: operate on Maxwell within a few days, or wait and risk his lung expanding and causing severe respiratory depression. To give the family greater peace of mind, Dr. Emil consulted with Dr. Laberge by email, who agreed that surgery sooner rather than later was the better option.

With the NICU team members, Dr. Laberge, Robyn and Martin all in agreement, Dr. Emil performed a lobectomy on Maxwell on his fifth day of life, removing half of the lung on the left side. Although the surgery went well, Maxwell had some complications including an infection and a collapsed lung. He spent the first month of his life in the NICU which was a trying one for Robyn. “I couldn’t breastfeed him and I could only hold him sporadically because he was under observation,” she says. “It was very hard.” She built a trusting bond with Marilyn, a night nurse in the NICU who encouraged Robyn to go home for a few hours to rest and promised to text or call if anything came up. “Feeling confident about leaving Maxwell at the hospital overnight meant a lot to me and I am so, so grateful to her.”

Human lungs continue not only to grow, but also develop new functional units in the first several years of life and Maxwell, who is still followed by Dr. Emil, is doing great. “He is big and healthy, and he has hit all of his milestones: he stands on his own and crawls on his tummy,” says Robyn about Maxwell, whose strength and resilience has earned him the nickname “Mighty Max”.