The missing factor: Growing up with hemophilia | Montreal Children's Hospital

The missing factor: Growing up with hemophilia 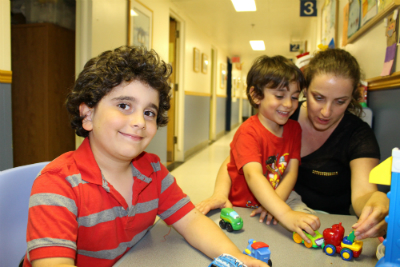 Gabriel (left) at a recent follow-up appointment in Complex Care with his mother Helene and little brother Robert (right). Robert does not have hemophilia, but Helene is a carrier.

Helene Zereik has spent the last few days thinking about whether or not she should let her seven-year-old son Gabriel go on a school field trip. She even drove to the outdoor activity centre in Île-Perrot to make sure the grounds were safe enough for her son. “Some parents think I’m just being overprotective, but this is our reality,” she says. “This is what happens when you have a child with hemophilia.”

Gabriel has Hemophilia B, a hereditary genetic disorder that makes it difficult for him to stop bleeding. In Gabriel’s case, his blood coagulates less than 1% of the time, because he’s missing factor IX, a special protein in the body that helps blood to clot. This makes Gabriel prone to joint bleeds. When he first started learning how to crawl, he had to wear kneepads because of the friction; otherwise his knees could swell up to the size of cantaloupes. As a toddler, his mother also made him wear a helmet at all times, in fear of him falling over and hitting his head. “Gabriel also bruises very easily and he would get these huge bruises on his ribcage from me putting him in and taking him out of his car seat,” says Helene. At five-months old, Gabriel rolled off the bed and hit his head. His parents rushed him to the Emergency department (ED) at the Children’s, a place where they spent every other weekend when he was a toddler.

At that point in time Gabriel was treated on a needs basis. When he got hurt, doctors or nurses from the MCH’s Complex Care Service would give him Benefix, a medication that temporarily increases his factor IX to a normal level. But Benefix’s efficiency starts to decrease after 24 hours. Now Gabriel is being treated by prophylaxis, a medical term used to describe when someone is ‘treated in anticipation’. “This helps minimize the risk of bleeding due to injury,” says Tania Lafleche, Gabriel’s nurse in Complex Care’s Hemophilia Clinic. “His parents give him Benefix two to three times a week, so that in case he gets hurt, he will have enough factor IX in him to stop the bleeding.” This new reality has decreased their trips to the ED, but introduced a new challenge – administering the Benefix. Benefix is administered intravenously, but Gabriel’s veins are very hard to find. “It broke my heart seeing him sit there, while we poked at his arms trying to find a vein,” says Helene. His nurse Tania suggested they install a port under his skin to make the process easier. Mom and dad were trained on how to use the port, which is located on the right side of his chest, and they have been treating him at home since January.

Gabriel knows he is different from other children and that there is a fine line between what he can and cannot do. In terms of sports, he cannot play any contact sports, but he does enjoy swimming and skating. The family has even developed a special routine in an attempt to reduce Gabriel’s chances of getting hurt. “We do have to be careful, so we try to go to the park early in the morning before it gets too busy,” she says. “All these little lifestyle choices have really helped lower my anxiety and Gabriel’s.” But at the end of the day, his parents know that he is still a kid, a kid who loves to play on the monkey bars and be silly with his younger brother and sister. “We can’t control everything he does, but my hope is that his disease becomes easier to manage as he grows up. Eventually he’ll start to understand his body better and his limits.”

Since Hemophilia B is hereditary and usually only affects men, Gabriel’s uncle Christian is also a hemophiliac. In fact, Christian has been treated at the Montreal Children’s Hospital’s Hemophilia Clinic since he was three-years-old. Because hemophilia is so rare, patients are followed throughout their entire lifetime by the MCH because it’s one of the only four designated hemophilia treatment centres in Quebec.