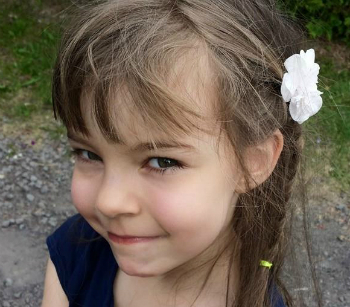 Charlotte was just 5 months old. For several weeks, she was coughing, but she continued to play and laugh and she was eating well, so I didn’t worry much. An appointment with the doctor reassured me; she was diagnosed with an upper respiratory infection. Treatment included both a Ventolin and Flovent pump twice a day and we headed home. Her two older siblings were also coughing, so we treated their symptoms and rested. But Charlotte’s cough continued to linger. The pumps weren’t showing any improvement. One night, the cough was particularly bad and Charlotte began to vomit up her bottle milk. I went back to the doctor, who prescribed penicillin and advised me to come back if there was no improvement after 48 hours.

Twenty-four hours later, unable to bear hearing Charlotte’s continuous cough and noticing that she was sleeping more and not drinking, I headed to my local Emergency Department in Saint-Jean-sur-Richelieu. In the car, Charlotte was laughing and singing songs with her Nanny, who accompanied me on the way. But the laughing subsided for all of us when the pediatrician on duty said he suspected Charlotte had pertussis (otherwise known as whooping cough). Charlotte was not vaccinated, because I had been working 50 hours a week since she was born and had not taken the time to go to the CLSC. That's when the commotion began: as a precaution, Charlotte was being sent to the Montreal Children's Hospital. The doctor told me that they would have to intubate Charlotte for safety reasons. As her mother, I was in complete shock…two minutes earlier, I had a baby laughing in my arms, and here I was off to an unknown hospital in Montreal with an intubated and sedated child!

Upon our arrival at the Children’s, a whole team was waiting for us. They quickly made the decision to transfer Charlotte to the Pediatric Intensive Care Unit (PICU) on 9D, where she would spend the following two weeks hooked up to a respirator and sedated. Her X-rays were disastrous: her entire respiratory system was affected. Without the help of the breathing machines, Charlotte wouldn’t be alive. Even while sedated and intubated, she was coughing. And when she coughed, the outline of her lips turned purple.

Every day we lived in fear of losing her. Antibiotic after antibiotic, nothing was working. Charlotte had a collapsed lung and had to be connected to another type of device: a high-frequency ventilator. Dr. Samara Zavalkoff, pediatric intensivist, called us to tell us the news. She was reassuring, telling us that Charlotte was responding well to new device, but emphasizing that this was her last option.  Torn between our need to be near her and caring for two children at home, we made the trip to and from the hospital every day. The Children’s helped us with parking fees, because the cost of living at a hospital was beginning to weigh heavily on us. The unit on 9D became our second home. We even spent the night when Charlotte’s lung collapsed. 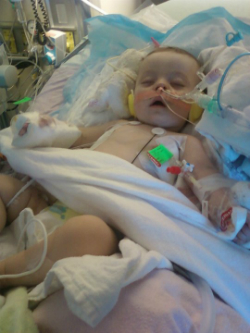 The staff members in the PICU were angels! Always welcoming and ready to give us their chairs so we could spend a few minutes with our little one who was hooked up to dozens of highly sophisticated devices, without which she would not be alive. I couldn’t touch my baby because it could cause her to resist sedation. I felt helpless in my role as her mother. No diapers to change, no bottles or baths to give. I couldn’t even rock her back and forth.  My little doll had to fight this on her own.

After a nightmarish two weeks, Charlotte began to show signs of healing! I will always remember the day Dr. Zavalkoff sat down next to us and Charlotte and said, “I think we’ve made it through!”

Her X-rays supported her claim; we could clearly see the difference between her condition at that moment, compared to when she had first arrived. Her lungs, once white on the initial X-ray, had become almost transparent. I cried a lot that day. It was as though I could breathe for the first time in two weeks. Within a short span of time, Charlotte got stronger and was transferred down to another unit. It was with a heavy heart that we left the super nurses on 9D.

When you’re hanging on your child’s every breath, two weeks feels like months! Today, Charlotte is 6 years old. She’s a curious, charming little girl, but is also a little warrior. I wouldn’t advise getting in her way! I am so thankful that my little one is alright, but am even more thankful to the Children’s and its’ staff members who did everything humanly possible to help her fight her way back to health!