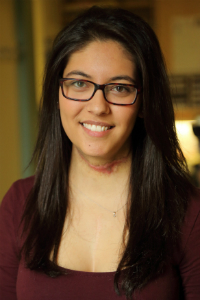 A young woman’s resilient recovery from a life-threatening illness

It was the first sunny day in May 2014 and 17-year-old Raphaëlla Vaillancourt was eager to take her new skateboard out for a spin. As a newbie to the sport, she was still getting a feel for it, sticking to small challenges and getting comfortable with her balance.  “I had never been down a hill before,” she says, as she describes the moment she jumped off her skateboard to avoid an abrupt dip in the road.

“I was aiming for the grass, but didn’t quite make it,” she says. Instead, Raphaëlla fell onto the sidewalk, landing on her jaw and splitting her chin open.

She quickly made her way to the nearest hospital to stitch up the deep cut. Despite being in pain and a little uncomfortable, she was able to make it through a day of final exams just a few days later at CEGEP Montmorency.

But four days after the skateboarding incident, Raphaëlla’s condition began to deteriorate rapidly. “I was suddenly getting really swollen in and around my neck,” she explains. “It kept getting worse and worse hour by hour.”

Panicked, her parents drove her to the Montreal Children’s Hospital’s (MCH) Emergency Department (ED). Once she arrived, the medical team didn’t spare a second. Raphaëlla was rushed to the crash room where she was assessed by the Emergency team. She was in and out of consciousness and the swelling was progressing to her throat, threatening her ability to breathe. They placed a tube in her throat to maintain her breathing. Raphaëlla closed her eyes. She would only wake up three weeks later.

“All I remember is being put into a wheelchair in front of the Emergency Department....that’s it,” says Raphaëlla, who awoke from a medically-induced coma in the MCH’s Pediatric Intensive Care Unit (PICU), only to discover she was much more ill than she could have ever imagined.

Specialists determined that her neck swelling was being caused by a life-threatening flesh-eating disease called necrotizing fasciitis. The infection is known to spread rapidly through the skin and underlying tissue and can be fatal if not treated urgently.

Head and neck surgeon Dr. Yolène Lacroix was called that night and performed a life-saving emergency surgery. She removed the already damaged tissue and stopped the bacteria from spreading further. “She had to remove muscles in my neck and sacrifice a nerve on both sides of my mouth,” explains Raphaëlla.

While hospitalized, Raphaëlla was visited by countless specialists, from respiratory therapists and nurses, to intensive care and infectious disease specialists. During and immediately following her surgery, with her body still in shock, she underwent an intense round of antibiotic treatment to ensure that the flesh-eating bacteria was eliminated from her body completely. She also had to rely on a breathing tube to keep her breathing stable and steady while unconscious, as the severity of the disease had weakened her lungs.

Waking up to a new reality 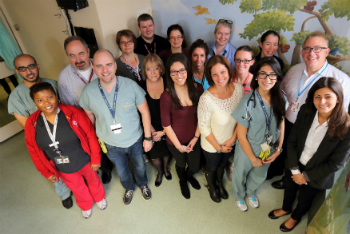 After spending three weeks in a comatose state, doctors began to slowly wake Raphaëlla up. “It was really weird,” she explains, “I thought I had been asleep for maybe a week. They started weaning me off my medication and I started to panic. I couldn’t really talk, I couldn’t walk or get out of bed...it was a really scary experience.”

Once she understood what had happened, the medical team informed Raphaëlla that the road to recovery would likely be a lengthy one. “They told me not to get my heart set on going back to school just yet. They said I’d likely get back to my routine by December.”

But by July 2014, Raphaëlla was making tremendous progress. With the help of daily physiotherapy and occupational therapy appointments, she was quickly regaining her strength, and her independence. “I was able to talk again, and move around in my bed. I took it as a personal challenge to get better,” she says. And she rose to the occasion.

After five weeks at the Children’s, she was transferred to a rehabilitation facility for three weeks, and by August, Raphaëlla was finally discharged.

“It was so great to be back with my family and friends,” she says with a smile. “I found out about how many of them had come to visit me while I was in the hospital and it was really nice to see everyone.”

Today, Raphaëlla is a focused student hoping to complete a literature degree after finishing up her Social sciences program this summer.

Grateful to be healthy, Raphaëlla says she’s enjoying seeing things from a different perspective. “I’m going out a lot with friends to make up for the summer I missed,” she says with a grin. “My experience really impacted me. I now make the most of every day.”