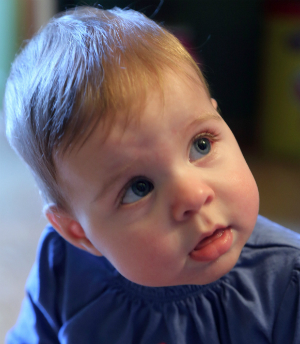 Amélie Bourassa’s pregnancy was going well but in her 28th week she began to feel weak and feverish. She was diagnosed with pneumonia, but the antibiotics prescribed to her didn’t work. Her condition continued to deteriorate and on April 21, she was admitted to the Royal Victoria Hospital (RVH). Soon after, the 34-year-old took a turn for the worse and her medical team decided to place her in an artificial coma. Attached to a ventilator, her heart was only beating at 20% and her kidneys stopped working. Two days later, while still in a coma, doctors decided to perform an emergency caesarean. “They told me that Amélie might not make it through the night, but that they would try to save the baby,” says her boyfriend, Samuel. “There was a chance I would lose them both.”

Florence Marcil was born at 29 weeks and weighed only 3.5 pounds. She was immediately transferred to the RVH Neonatal Intensive Care Unit (NICU) where a group of doctors and nurses managed to stabilize her over a four-hour period. Although premature, Florence was strong. “She was a fighter,” says Samuel. He and Florence’s grandmother visited the baby every day for the next two months. Florence started to gain weight and was weaned off oxygen as her lungs began to mature. “Before sending a premature baby home, our goal is to make sure they weigh at least five pounds,” explains Kaylea Curotte, a nurse in the RVH NICU who was at the hospital the night Florence was born. At 38 weeks, Florence was finally ready to go home--but her mother was not. 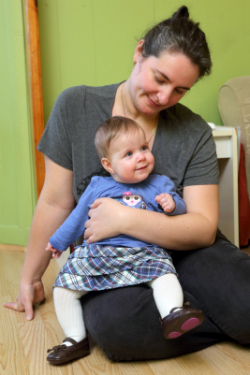 Amélie’s internal organs had begun to fail after Florence was born. She was placed on extracorporeal membrane oxygenation (ECMO), a technology that provides both cardiac and respiratory support when a patient’s lungs and heart are too weak to function. “It was a horrible time in our lives,” says Samuel. “I was back and forth between the adult and neonatal intensive care units and then I’d rush home to make dinner for our other daughter Delphine. It was so hard trying to explain to her why she couldn’t speak to mommy.” When Amélie’s team of doctors determined the type of virus attacking her lungs and heart, they were able to successfully treat it. “They discovered it was a type of virus that any kid could catch, but it affected me so severely because I was pregnant,” she says.

It was only on May 7 that Amélie woke from her coma. She didn’t know she had already given birth. She met Florence for the first time on May 23, a month after she was born. Three days later, Amélie was transferred to a rehabilitation centre. After spending weeks in a coma, Amélie had to learn how to walk again. “It was extremely challenging, but I just kept thinking about my two daughters and my boyfriend,” she says. It motivated her to recover quickly – Amélie was home in less than six weeks.

Follow-up care at the Children’s

Florence is now followed by the Montreal Children’s Hospital’s Neonatal Follow-up Program, a multi-disciplinary team made up of numerous services and departments throughout the hospital that follow up with the highest risk patients from the RVH and MCH NICUs. The program members analyze how a child is progressing at crucial milestones in their development, and then refer families to other services if they notice a serious problem. “We judge how these babies are doing based on their corrected age, not on their actual age,” explains Dr. May Khairy, a pediatrician in the Neonatal Follow-up Program. “For example, although Florence was born on April 23, her mother was due on July 3. So when we first met Florence in November, we treated her as a four-month-old.” At four months, the clinic assesses gross and fine motor skills, as well as social, pre-language, behaviour and sleeping patterns. “We closely observe the child during these sessions,” explains Dr. Khairy. “While playing with the child we look at things like the child’s posture, behaviour, movement and dexterity. This type of evaluation gives us a better overall feel of how the child is doing, and in Florence’s case she’s doing really well.”

Making up for lost time

Even though Amélie missed the first months of Florence’s life, she is now making up for lost time. Thanks to a photo album put together by Florence’s primary care team at the RVH, Amélie has a few keepsakes from the first few months of her daughter’s life.  The album is filled with photos, heart-felt messages from staff and little treasures, like an imprint of Florence’s tiny foot. “This album means so much to me,” says Amélie. “I am so grateful for everything the hospital did for us. Everyone went above and beyond. The fact we’re both alive is truly a miracle.”