One bite at a time | Montreal Children's Hospital

One bite at a time 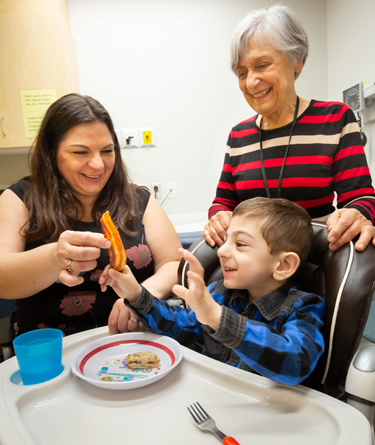 Dante spent the first 292 days of his life in a hospital. He came into the world a lot sooner than expected; his mother, Mariarosa, was less than six months pregnant when he was born – and against all odds, he survived.

At six weeks old, Dante developed necrotizing enterocolitis (NEC), a common condition in premature babies where the tissue in the intestine becomes injured or dies off, causing inflammation. As a result, he was transferred from the Jewish General Hospital to the Montreal Children’s Hospital’s Neonatal Intensive Care Unit (NICU).

After a month and a half, doctors could see a stricture in Dante’s intestines. They decided to operate to remove the damaged tissue, but two days later, it necrotized again so he underwent two more surgeries to repair and reattach his large and small intestines. “This left Dante with a smaller gut,” explains Mariarosa. “At this point, he was being fed almost exclusively through an IV tube and he was monitored closely to make sure his stomach was fine and that he could digest food properly.”

Eventually, a nasogastric tube (NG tube) was inserted in his nose and down into his stomach. He began gavage feeding 21 hours a day, but he could only tolerate 21 millilitres of formula an hour. “Doctors weren’t sure why he couldn’t tolerate more liquid, so we decided to perform another surgery. The surgeons made a revision to his intestine and at the same time we decided to remove the NG tube and insert a gastrostomy tube (G tube),” says Mariarosa. “My husband Michael, and I, were hesitant about inserting a G tube, because it sounded more permanent, but in the end it was the right decision.”

The main difference between the two tubes is that the G tube delivers food directly into the stomach. It also meant that Mariarosa and Michael were one step closer to bringing Dante home. Then on June 21, 2016, their dream finally came true. “It was a very emotionally overwhelming day for us. We didn’t think our son was going to survive and now we were bringing him home,” recalls his mother. But Dante still had many more hurdles to overcome.

Learning how to eat

Shortly after being discharged, Dante began being followed by the MCH’s Neonatal Follow-up Clinic and met weekly with pediatric gastroenterologist, Dr. Ana Sant’Anna, and nutritionist, Marie-Josée Trempe. Because he had been gavage fed his entire life, he hadn’t developed the skills to eat, and was dependent on his G tube. “We didn’t want this to be a permanent solution, so we were eager to have it removed,” says Mariarosa.

In order to help with the transition, the family was referred to Dr. Maria Ramsay, Director of the Children’s Pediatric Feeding Program. The program, whose patient population has doubled in size in the last five years, offers a multidisciplinary approach to evaluating and treating children with a variety of feeding problems, especially those who are dependent on a feeding tube.

“After meeting with Dr. Ramsay, she explained that it was too early to remove his G tube and there were many steps we had to take before beginning that process,” says Mariarosa. One of those steps was being able to eat some pureed food and drink liquid safely. “Before beginning to wean off a child from gavage feedings, I assess whether or not they are physiologically and medically ready,” explains Dr. Ramsay. “Based on the guidelines I developed for home-assisted tube feeding removal for medically fragile infants, it was clear that Dante wasn’t ready yet.”

Then on May 31, 2017, Dante made a huge breakthrough. Occupational therapist, Christine Labelle, had been working on developing his eating skills and managed to get him to swallow a piece of food. “She ran into my office with the biggest smile,” recalls Dr. Ramsay. “We were both so happy, because we knew he was physiologically ready – which is the most crucial part to this process.” 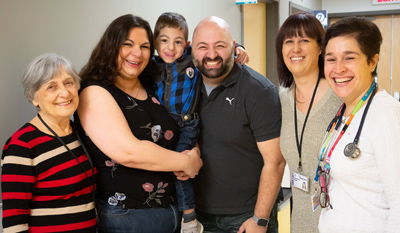 In an effort to continue to expose Dante to more food, he first had to stop his continuous feeding. “We started to give him three set meals of bolus feed throughout the day,” explains Mariarosa. Bolus feeding is a method of delivering formula from a syringe or pump into a feeding tube. “We needed him to get used to eating three meals a day like the rest of us,” she continues.

Their son was then prescribed an appetite-stimulating medication. “For maximum effectiveness, it’s important to cycle the medication. For Dante that meant five days on it and two days off, because you don’t want the body to get used to it,” says Dr. Ramsay.

Dante also began being exposed to different types of food textures and smells. “We tried getting him to lick pieces of apples, pears, or taste things like apple sauce. At first, he didn’t like anything, but then he tried bacon! It was the first time he licked something and smiled,” she says. Dante’s family was then advised to reduce his bolus feeds from three to two in an attempt to get him to eat real food. But after two days, he had lost too much weight, and returned to three bolus feeds. “This trial and error process is different for every child. What works for one patient might not work for another,” explains Dr. Ramsay. “It’s important to work closely with the family every step of the way.”

During this time, Dante was being weighed regularly. He needed to gain weight before they could try weaning again. Then in November 2017, Dr. Ramsay and her team felt he was ready. On top of his two bolus feeds, Dante began eating pieces of food, like chunks of hamburger meat and of course, bacon. Over the next six months, Dante continued to eat food once a day, but he wasn’t gaining or losing weight. “Eventually we had to stop again and return to the three bolus feeds, because he was getting taller, but not fatter. He was dropping off the growth curve again,” says Mariarosa. 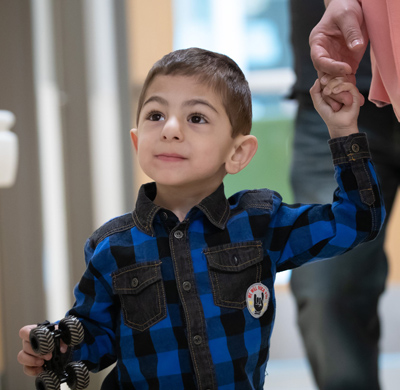 Discouraged, Mariarosa and Michael began to lose hope that their son would ever have his G tube removed. “Dr. Ramsay helped us a lot during this period. She said she was confident that Dante would eat normally one day and that gave us a lot of hope,” says Mariarosa. “She told us that he was already a success, because he was no longer psychologically dependent on his tube. He now knows how to eat and that’s a huge accomplishment.”

Today, Dante is more open to trying new foods and he’s eating more regularly by mouth. “Every morning, he wakes up and says ‘Mommy, I’m hungry! I want breakfast’. Such beautiful words to hear,” she smiles. He can now wolf down two high-calorie pieces of toast slathered in butter and Nutella. He still receives all of his main nutrients through his bolus feeds, but now he adds breakfast and lunch to the mix. “We are fully concentrated on getting him to gain weight so we can begin the weaning process again,” explains Dr. Ramsay. “We’re getting there!”

“Initially, my husband and I were opposed to having the G tube inserted, but if that’s what Dante needs, that’s what he needs,” says Mariarosa. “We wanted so badly for him to be a ‘normal’ kid, but this is his normal. When he doesn’t need it anymore, he won’t need it; but until then it’s a big part of him and we don’t want him to ever be ashamed of it.”