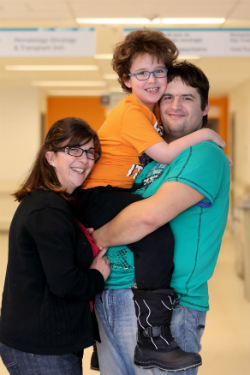 Two years ago, Dr. Nada Jabado, hemato-oncologist at the Montreal Children’s Hospital, and researcher in the Child Health and Human Development Program at the Research Institute of the McGill University Health Centre (RI-MUHC), approached Dr. Jean-Pierre Farmer, neurosurgeon and Chief of Surgery at the MCH, about a promising discovery for treating brain tumours. She explained that a mutation—known as BRAF V600E—found in a certain type of melanoma was the same mutation found in a subset of brain tumours known as gangliogliomas. What’s more, drug treatments using targeted inhibitors with proven clinical success in treating melanoma were available. Dr. Jabado suggested that these same treatments could be used to target gangliogliomas that carried the specific mutation.

The first patients in Quebec to take one of these drugs were a young girl and a teenage boy, both diagnosed at the Children's, who had tumours that could not be completely removed by surgery. They had failed several therapies, including radiation therapy, but within a month of starting the targeted treatment, their tumours shrank. The positive outcome from their treatment paved the way for another young patient this past fall. 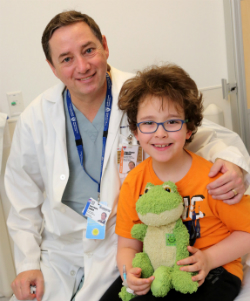 Seven-year-old Karl is a bright young boy with a huge smile and a mischievous sense of humour. Last August, on a short trip with his parents Marc and Josée to visit family in the Laurentians, he began feeling pain in his arm. He’d been playing on swings in the park so his parents thought he might have pulled a muscle. Karl didn’t sleep well that night, but the following day he was ok. The next night, he slept poorly again. His parents took him to the local hospital, and received a referral to Orthopedics at the Montreal Children’s Hospital for a possible brachial plexus injury. A magnetic resonance imaging (MRI) scan of Karl’s plexus was started but it rapidly revealed the presence of a tumour. Within a few hours, Karl was seen by Dr. Farmer who explained to Marc and Josée that Karl’s tumour was in his brainstem and cervical spinal cord. (Photo right: Dr. Jean-Pierre Farmer and Karl)

Dr. Farmer suspected that Karl’s tumour was a ganglioglioma but the only way to confirm a diagnosis is by biopsy. Gangliogliomas are low-grade tumours which occur most frequently in the brain. As the tumour grows, it can lead to symptoms such as seizures, fatigue, or weakness on one side of the body.

The treatment process often involves surgery to remove the tumour, but complete removal is not always possible if the tumour is close to important functional areas of the brain. However, if the tumour is not completely removed, it will continue to grow. Even after surgery, the tumour can grow back. “The surgery would have required an extensive incision that might have destabilized Karl’s cervical vertebral column,” says Dr. Farmer, “and the chances of a complete resection were slim because of the tumour’s location in the brainstem and cervical spinal cord. We always have to think of what’s best for the patient. In Karl’s case, performing a biopsy to confirm the diagnosis and mutation was preferable. However, if the biopsy did not confirm the mutation, Karl and his family would have had to face a more extensive surgery a few weeks later. As it turned out, Karl was an ideal candidate for the drug treatment.”

Two weeks after Karl’s biopsy, he and his parents met Dr. Jabado, who sees patients at the Children’s in addition to her work at the Research Institute. “Dr. Jabado explained how the drug treatment had the potential to shrink Karl’s tumour,” says Josée. “At first I was worried about giving Karl the medication at home, but once we got through the first day I saw that Karl was going to tolerate it well.” 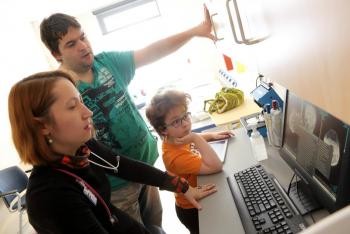 “The BRAF mutation that is common to both melanoma and a subset of gangliogliomas opened the door to consider the drug treatment for children with these types of gangliogliomas,” says Dr. Jabado. “For Karl, as for any child who is a good candidate for the treatment, providing an option that is this effective with minimal side effects is very promising.” (Photo left: Dr. Legault, Marc and Karl look at results from his MRI scans).

Karl’s tumour has responded well to treatment. Three weeks after he started the therapy, his tumour shrank by 50 per cent and he regained use of his right hand. By the time he had his third MRI in November, the size of his tumour had decreased by 75 per cent. He and his parents now come to the Children’s every month for check-ups. The tumour is stable and hasn’t moved so he’ll continue on the drug treatment for the foreseeable future.

The decision to try the drug treatment meant a much quicker recovery for Karl and the possibility of saving his right hand. Any other therapy would have taken more time to be effective, if at all. “The rapid response in the two other patients we had treated, and results for a few other children treated in the US, drove us to offer this therapeutic option,” says Dr. Jabado. “It also meant a better quality of life for Karl since it’s a pill taken orally that does not require infusion or a hospital stay.”

Dr. Farmer adds that the commitment of so many people on the team played a significant role in Karl's recovery. “There was a huge change in just a few weeks,” says Josée. “Karl’s recovery was fast, and he was able to go back to school very quickly. We’re very grateful that the treatment was an option for him. And we’re more than grateful to have Dr. Jabado and Dr. Farmer looking after him.”