A rare diagnosis, a life-saving surgery 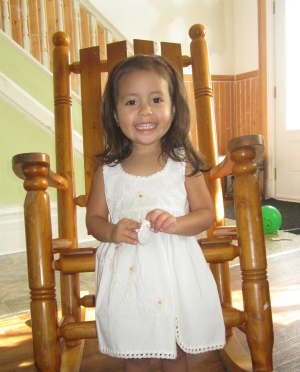 For a little girl who had always been healthy and full of energy, Abigail’s change in demeanor and inability to keep weight on were worrying signs to her parents Santos and Melanie. Just before Abigail’s second birthday, Melanie started to notice something funny. “She was constantly squirming and holding her stomach. I have three other kids and they never did this, so I knew something was wrong.” Abigail often didn’t eat full meals and complained about being hungry. In the year that followed, on a number of occasions, Abigail had various symptoms from stomach pain to vomiting, and often showed signs of having a gastro.

By the spring of 2015, Abigail’s bouts of vomiting became more frequent. “When you think of how easily a gastro can hit the entire family, it was very weird that nobody else in our house ever got sick,” says Melanie. “Abigail’s weight dropped from 32 to 25 pounds, and she had a hard, distended belly. I really thought she must have a blockage of some kind.” They made a couple of trips to Emergency at the Montreal Children’s Hospital, but still Abigail’s symptoms continued.

Their final trip to Emergency was the turning point in Abigail’s diagnosis. “God was my only hope at this point,” says Melanie. “Abigail was completely lethargic, she hadn’t had a bowel movement in five days.” Abigail underwent an ultrasound of her abdomen. “Two days after we'd made it back home, the hospital called to say bring Abigail back immediately.” By 5:30 PM that day, Abigail was in surgery.

One of the first people they met on returning to the hospital was Dr. Sherif Emil, head of Pediatric General and Thoracic Surgery. It was the first time Melanie felt a sense of relief.  “From the moment we met Dr. Emil, everything got better,” she says. “He explained everything so clearly, he never rushed us.” Abigail was admitted to the hospital, had an emergent work-up to confirm the bowel obstruction, and was booked for surgery as a category 1 emergency—the most acute. Laparoscopy—an examination of the abdominal cavity with a camera—diagnosed a very rare intestinal obstruction due to a lymphatic malformation of her intestines. It resulted in large cysts that caused her intestine to twist. Through a small incision, the portion of the intestine containing four grapefruit-sized cysts was removed. “The entire surgical team was great,” says Melanie. “Dr. Emil told us that he was very familiar with Abigail’s condition since it was the subject of his first published paper in pediatric surgery. In fact, he sent us a copy of the paper by e-mail.”

The day of Abigail’s surgery was May 21—just three days before the new Children’s opened. Abigail was still an inpatient on the 24th so she and her parents made the move to the new hospital. “It went pretty well, actually, and we were home shortly after that,” says Melanie.

Abigail gradually returned to a healthy weight and her mom says she’s doing well. “Her demeanor is back to what it used to be. She’s happy and healthy again.” A fact that makes her parents very happy too.