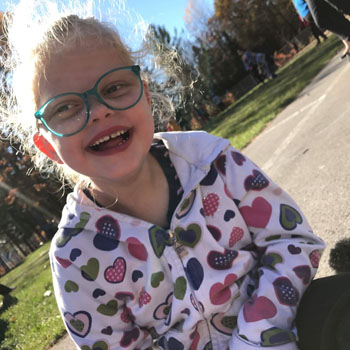 Jessica Lowe and her partner, Jonathan Tinkler, were beyond excited to welcome their second child, Sarah in May 2011. But at 3 weeks old, Sarah, began to exhibit some concerning symptoms, recalls Jessica. “She was having a lot of trouble nursing, and started to refuse to eat entirely,” she explains. “Around that same time, we started noticing her head appeared to be larger and she was becoming more and more lethargic. We decided to head straight the Children’s.”

The moments that followed are etched into Jessica’s memory as the moment that everything changed. “We ended up in the Emergency Department,” she explains. “The nurse flipped Sarah around and asked, ‘Do you find her head big?’ The minute the doctor walked in, he echoed her concerns. A flurry of health professionals came down after that, with tests being run, images being taken, everything happening at the same time.”

Pediatric neurosurgeon, Dr. Jean-Pierre Farmer came to meet Jessica and her partner, Jonathan with some news. The diagnosis was a teratoma tumor: a mass in her brain bigger than any he had seen before in a baby her size. 3-week-old Sarah would require an 8-hour neurosurgery to remove it.

The months that followed the initial surgery were a whirlwind. The space the tumor had once occupied in Sarah’s little brain would build up with fluid, and a shunt would be required to drain it. Within a period of just 5 months, Sarah required seven surgeries.

From the time her tumor was removed, Sarah’s family was told that she would need to be placed on seizure medication because of the abnormal activity in her brain. Sarah’s treatment team warned Jessica that seizures could happen at any time, but nothing could have prepared her for Sarah’s first seizure in March 2014, when she was 3 years old.

“It was the scariest thing I’d ever seen,” recounts Jessica, who says it was the middle of the night when Sarah began to vomit. She remembers running in thinking she was sick. “Her eyes were going back and forth and her left side was pulsating. Having a brother who had epilepsy, I knew that seizures typically subside after a few minutes, but this one wasn’t letting up after 5 minutes. We called an ambulance and upon her arrival to the hospital she had to be treated with anti-seizure medications to stop it. Her first 6 seizures that year each lasted upwards of 50 minutes.”

The years that followed saw Sarah’s seizures transform from 50 minutes to just 5 minutes and then subside for an entire year due to a combination of medications. But as is the case with any chronic illness, symptoms can be difficult to manage and Sarah’s seizures began to come back two years ago, and began to manifest themselves differently. “She started falling very often,” explains Jessica. “She is already semi-paralyzed on her left side, so I thought in the beginning that she was experiencing a bit of muscle weakness. We consulted physiotherapy and did more testing but the results didn’t show anything conclusive. But they continued and they were uncontrollable.”

It was during this time that the family was referred to pediatric neurologist, Dr. Kenneth Myers. “Dr. Myers observed Sarah and very quickly confirmed that despite there not being any seizure activity on her tests, her falling episodes were definitely seizures,” says Jessica. She was officially diagnosed with epilepsy, and placed on a variety of different medications to try and better control her illness, but the seizures were unrelenting and varied between convulsions and falling with no abating. After much trial and error with medication, Dr. Myers and Dr. Farmer’s goal was to perform additional testing to pinpoint the exact area of the brain these seizures were coming from with the goal of disrupting them differently – perhaps with surgery.

Just before Christmas 2018, after reviewing the results of lengthy testing conducted while trying to provoke Sarah’s seizures for analysis, Dr. Farmer reached out to Jessica and Jonathan to discuss next steps. “He explained that Sarah’s abnormal brain activity was coming from the right side of the brain in 2 separate points -- the same side as where her tumor had been located,” says Jessica. “He recommended Sarah undergo a hemispherectomy to cut the connections between Sarah’s left and right brain hemispheres with the goal of completely eliminating her seizures.”

The decision to undergo such major surgery was by no means an easy one. Jessica says that while the family was informed that the surgery has a 90% success rate of completely eliminating seizures, there were side effects to consider as well: she would likely have opposite side paralysis, vision issues and would lose some mobility in the short to medium term. “Despite the risks, these were all side effects that Sarah mostly deals with already,” says Jessica.  “On her worst day, Sarah can have upwards of 200 falling seizures within a 24 hours period. And while she is developing well, and can walk, talk and goes to regular school, she does have issues with mobility and speech delays. The team explained to us that having the surgery would greatly improve Sarah’s development. It was a decision that we thought long and hard about.”

After speaking with several other families whose children had undergone the surgery with very positive results, the family decided to go forward with it, and Sarah’s surgery is planned for some time at the end of this year.  “We know it will be a major operation and we are prepared for the things that come with it,” says Jessica. “What reassures us the most is that Dr. Farmer will be performing it. He’s already helped Sarah before and we couldn’t trust anyone more. We have a truly wonderful team surrounding us and they’ve made all the difference for Sarah and our family.”

“Despite everything that she’s gone through, Sarah is a happy, positive and constantly smiling 7-year old. She even comes out of seizures laughing and telling jokes. I just hold on to her strength and to the help that’s around us. It’s the most incredible resource,” says Jessica. 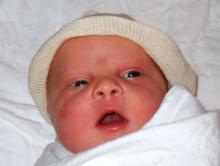 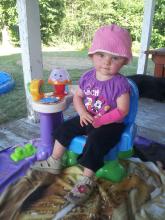