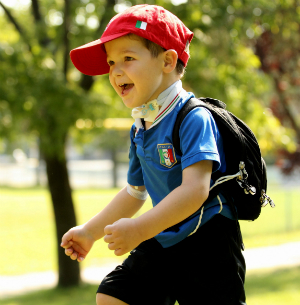 Stefano Ruvo is officially a big boy. The four-year-old started pre-school on September 2 – an incredible personal feat considering everything he has gone through to get to this point. “We always wanted Stefano to go to school; we just had to jump through a few hoops to make it happen,” says Vito Ruvo, Stefano’s father.

A complex condition right from the start

Stefano spent the first 13 months of his life at the Montreal Children’s Hospital after being diagnosed with Congenital Central Hypoventilation Syndrome (CCHS) and Hirschsprung’s disease. CCHS affects Stefano’s breathing in that his brain cannot send signals to his diaphragm to move, making it impossible for him to breathe on his own. Stefano is connected to an artificial ventilator through a tracheostomy, a small hole in his neck that acts as a direct airway to his trachea. Hirschsprung’s disease is a condition often associated with CCHS, wherein the nerve cells that help discharge body waste do not function properly. This affected his large intestine and a third of his small intestine had to be removed.

“Even though Stefano has a complex medical condition, he is a very bright boy who will truly benefit from a stimulating learning environment,” says Dr. Anne Marie Sbrocchi, his pediatrician in the MCH’s Complex Care Service (CCS). “Our department is devoted to getting patients home quickly and in school so that they can live as normal a life as possible. We worked very hard with Stefano’s family and external community groups to make sure this could happen.”

Preparing for life at school 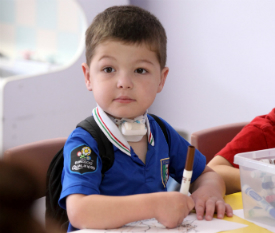 The CCS team has, in fact, spent years preparing Stefano for a full day of school. For the last two years, a specialized educator has been evaluating and preparing Stefano for this next stage in his education. She worked primarily on his speech, which was slightly delayed because of the tracheostomy and spending his first 13 months in a hospital bed. When he started daycare last September-- at the same school he is attending this fall -- Vito, Dr. Sbrocchi and Sylvie Canizaris, a nurse clinician in Complex Care, spoke to staff and students in order to educate them about Stefano’s condition. “We told kids about all the different equipment that Stefano needs and what they were allowed to touch and not touch,” explains Dr. Sbrocchi. “We also educated the staff about early warning signs and helped them develop an action plan in case of an emergency. Visiting his school reassured us that this was a safe and productive environment for him.”

Then last November, Stefano took another big step forward when Dr. Sherif Emil surgically implanted a diaphragm pacemaker under Stefano’s skin. The device causes his diaphragm to contract by sending radio waves from an external transmitter to the implanted receivers under his skin. The receivers then convert this energy into pulses which are sent to the electrodes, which in turn stimulate the diaphragm to contract. This allows Stefano to breathe without the artificial ventilator. “The external transmitter is hidden away in a knapsack that Stefano wears on his back,” Sylvie explains, “which allows him to be more mobile and feel like the other kids.” Eventually he’ll be able to use the device 12 hours a day, but Dr. Sbrocchi, her team, and Stefano’s respirologist Dr. David Zielinski, are slowly easing him into the transition. He was recently given the green light to use it for three hours, twice a day. 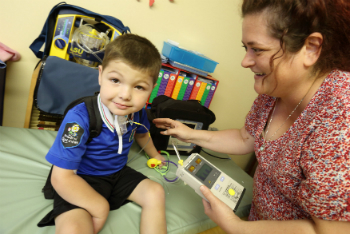 Due to all of his daily medical needs, a registered nurse must remain by Stefano’s side throughout the day. The school set aside a room for all of Stefano’s clinical equipment, which consists of his ventilator, suction machine for his tracheostomy, and oxygen tank in case of an emergency. The space also allows the nurse to tend to him privately. “We want Stefano to feel normal, so we asked the nurse to give him space and only intervene when he’s not well,” says his mother, Rosa. “It’s also important for his teacher to feel free to discipline him if he acts up and not treat him differently from the other children.”

Stefano may be different to the other students in certain respects, but it looks like he’s fitting in just fine. “Despite his medical obstacles, Stefano will be able to do anything he wants one day,” says Dr. Sbrocchi. “But for now, we’ll focus on elementary school!”