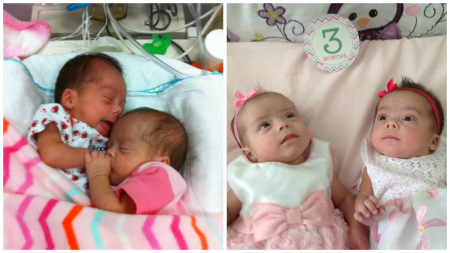 Twins Ashley and Victoria were born 10 weeks early and they spent the first month of their lives in the Montreal Children’s Hospital Neonatal Intensive Care Unit (NICU).

When Isabelle and her husband Denny found out they were having twins, they were told to expect an early delivery. “It’s rare that twins go to 40 weeks, so we knew there was a good chance they’d be early,” says Isabelle. “But we never expected they’d arrive 10 weeks ahead of their due date.”

Just after Christmas, in her 29th week, Isabelle was admitted to the Royal Victoria Hospital (RVH) at the MUHC. A few days later Ashley and Victoria were born and they were immediately transferred to the Montreal Children’s Hospital Neonatal Intensive Care Unit (NICU) which is only steps away from the RVH birthing centre. Ashley, who weighed 3 pounds, 1 ounce, was put on Continuous Positive Airway Pressure (CPAP) right away. Victoria, who weighed only 2 pounds, 6 ounces, was in distress and had to be resuscitated, then intubated. After a month in the NICU where they improved rapidly, the twins were transferred to Lasalle Hospital where they spent a few more weeks before going home.

Isabelle says being pregnant with twins was very different than being pregnant with her first-born who just turned three years old. “With the twins being born so early, I didn’t have as much time to feel pregnant,” she says, “but at six-and-a-half months, I felt like I was already at nine months.” Considering how early they were born, Ashley and Victoria are doing well with no major health problems. What’s more, their mom says they both sleep pretty well.

“Right now, having two infants at home can be stressful—like when they’re both crying at the same time—but we know it will get easier,” says Isabelle. She also loves the fact that as twins, Ashley and Victoria will always have a friend and someone to play with. “Every parent knows how great it is to see their baby smile, and to cuddle them. It’s more work with twins, but you get twice the hugs and twice the love!”