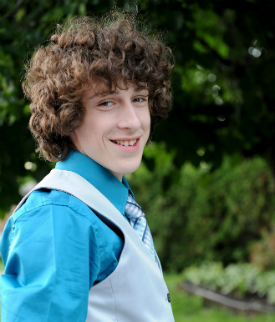 At 13 years old, Hubert Jacob - a hockey and karate-practicing teen - had just started high school when he suddenly began to experience debilitating bouts of diarrhea. “At first we thought it was just a few isolated incidents of having an upset stomach,” explains his mother, Madeleine. The episodes, however, didn’t stop.

Usually active and energetic, the teen’s health was declining rapidly.

Worried about their son’s health, Hubert’s parents took him to the Montreal Children’s Hospital’s Emergency Department where he was admitted for dehydration caused by an extreme loss of fluids as a result of acute diarrhea. The diagnosis soon followed: Hubert had Crohn’s disease, a condition that causes inflammation of the gastrointestinal (GI) tract.

What is Crohn’s disease?

When a patient has Crohn’s disease, all of the body parts that deal with processing food can become inflamed. The walls of the inflamed area thicken and develop a cobblestone-like surface. This can cause stomach pain, vomiting and loss of appetite, among others. What’s more, there is no cure for Crohn’s disease – the management of the disease is done through controlling the symptoms.

What followed seemed like a whirlwind of hospitalizations, treatments and struggles to get Hubert’s disease under control. “We tried almost everything to help with the management of his condition,” says Madeleine. “The more he relapsed with symptoms, the more the disease was impeding his growth. From age 13 to 14, we were in and out of the hospital. We spent birthdays, holidays and several weeks on end in the hospital. Hubert was immunosuppressed, and extremely sick. He just wasn’t gaining weight, and he wasn’t growing.”

In a period of 20 months, Hubert was hospitalized five times and missed almost two years of high school. At age 14, he was four feet and 7 inches tall and weighed 77 lbs - much smaller than other boys his age. Hoping to find a solution that would get his growth back on track, Hubert and his family, along with his gastroenterologist, Dr. Terry Sigman, decided to try another option: surgery. 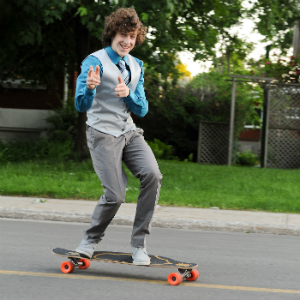 Having exhausted all other treatment options, surgery was the only remaining alternative that held promise for Hubert. On July 2, 2011, Dr. Sherif Emil, director of general and thoracic surgery at the Montreal Children’s Hospital, and his team performed an operation in which Hubert’s entire colon was removed by laparoscopy (also called minimally invasive surgery) using a camera and several very small incisions. He was left with an ostomy bag to collect his stool until his intestines are reconnected at a later date through a second surgery.

The change, says Madeleine, was night and day. “Once out of surgery, Dr. Emil told us that he had never seen a colon in such a state,” she says. “It made us realize just how important the surgery was for our son. It was amazing to see him slowly get better from that moment forward and to resume his regular activities.”

Today, Hubert is back to being his active, happy-go-lucky self. Despite having missed two years of high school due to illness, his mother proudly affirms that the now nearly 18-year-old graduated with the rest of his high school class thanks to his hard work during hospitalization. Now a CEGEP student at Cégep de Saint-Laurent, Hubert hopes to eventually study Health Sciences, so that he can put his personal experience as a patient to use as a future doctor.

Dr. Emil affirms that he is already using his personal experience to pay it forward: Hubert recently came to the hospital to cheer on another patient who had undergone the exact same operation. “It made all the difference to that patient's recovery,” says Dr. Emil. “Night and day as the nurses have said!”

“We definitely didn’t follow a straight and narrow path to get to this point,” says Madeleine looking back at her son’s journey, “but if this is what it took, I am happy that Hubert can now lead a normal life like his peers.”