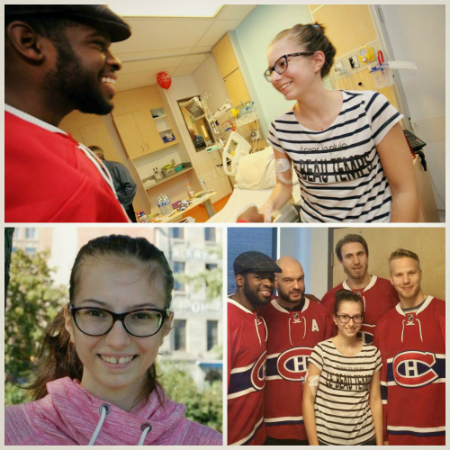 My name is Anne-Lucie Croteau, I’m 15 years old, and I have a mechanical heart. Today, I’m going to tell you my story.

It all started in early November 2015. I started feeling tired and I wasn’t very hungry—I really felt crummy. I thought I might have a cold or something else that would go away soon enough. But, a week went by and I didn’t feel any better. It was November 13 and 14—I had two ped days; I was exhausted and had hardly eaten anything. I decided to go to the store, just to get out of the house for a while, thinking it might help me to see other people. Big mistake. I felt terrible all of a sudden, probably due to a drop in my blood pressure. They took me to the infirmary and then I went home. I blamed it on the fact that I hadn’t eaten much in the previous few days. That night, my mom left on vacation down south. Saturday morning (the next day), my dad and I decided I should see a doctor, but we were too late, there were no spots available at any of the walk-in clinics. We went back the next day, and I ended up leaving with a diagnosis of bronchitis and a prescription for antibiotics. I was relieved that I was finally going to feel better! False alarm…

I went back to school on Wednesday, November 18, after three days of antibiotics. I was feeling better; I even remember thinking it was the best I’d felt all week! First period went by. I was tired but no more than I’d recently been feeling. It was during second period that things started to go south. At 9:45 a.m., during my homework period, I really started to feel bad. I had a stomach ache, I was hot, and I felt like I might throw up. My friend noticed that something was off, so she went with me to the office to call my father. That was the call that changed my life. The school sent me home. Just being outside in the fresh air made me feel better. My dad texted me to say he’d made an appointment with my pediatrician at 3:30 p.m. that afternoon. I’d had anemia in the past, but I had stopped taking my medication because it made me feel sick. So, I presumed the pediatrician would probably look into that.

As the afternoon went on, I began to feel worse. My heart was racing; I couldn’t concentrate on anything else because I was so focused on my heart. I was having trouble breathing. My dad got home from work at around 3:15 p.m., and we left for my appointment. My doctor asked me a few basic questions, did the usual tests, and then took my pulse: 132 beats per minute, which was extremely fast. She told me to go that same night to the Montreal Children's Hospital for an electrocardiogram.

At around 5 p.m., my dad and I went home to pick up a few things before heading to the hospital, thinking we would probably be home by about 10 p.m. My heart raced the whole way there. We finally arrived at the Children’s after a good 40-minute drive.

The pre-triage nurse didn't even need to take my pulse to know there was a problem. She could see my shirt moving in time with my heartbeat, which was pounding and racing at the same time. The triage nurse noticed the same thing. We were sent to the Yellow room, where I waited to have an x‑ray. After that, they did an electrocardiogram and then the fateful echocardiogram. I was wondering why they were doing so many tests when I’d only come in for an ECG. The longer the echocardiogram went on, the more worried I got. I convinced myself that the only reason it was taking so long was that there had to be something wrong with me.

Finally, Dr. Jutras, the cardiologist, gave us the bad news: my mitral valve was defective, the little fibres holding it in place were completely destroyed. They had to operate as soon as possible to repair or replace it. But, he had to consult with his team first, because he couldn’t make such a major decision on his own “What’s ‘as soon as possible’?” I asked him. “Tomorrow morning,” he replied.

I was in shock. I couldn't understand why this was happening to me. I was terrified this might prevent me from dancing for the rest of my life. A team of doctors and nurses transferred us to another room. From that point on, everything went really quickly. They put me on oxygen, put in an IV, did blood tests and, finally, sent me to Intensive Care, where I spent the night. I barely slept, even though I remember thinking I should sleep because the next day was going to be very difficult.

The next morning, they did another x-ray, which showed that my condition had gotten much worse since the day before. The doctors came to explain the surgery to us, saying that the best option was a mechanical mitral valve, even though I’d have to take a blood thinner for the rest of my life. I gave my consent and signed the papers; we called my mom to update her on the situation, and away we went. They wheeled me toward the operating room, took off my glasses, and I said goodbye to my dad, who was trying not to cry. They transferred me to the operating table, put the mask on me, and I fell asleep.

When I woke up, I could only remember as far back as Saturday night. My mom was there—she had taken an early flight home on the Thursday night. They removed the tube during the day and I was able to talk. On Sunday, I was completely awake. I wasn’t able to do much, so it felt like the time really dragged on. That night, they transferred me from Intensive Care to Intermediate Care, where I spent one day. My surgeon, Dr. Bernier, and the resident, Dr. Burns, explained exactly what had happened to me. I’d caught an extremely rare bacteria that had attacked and destroyed my mitral valve. Michèle, one of the Cardiology nurses, also came to talk to me about Coumadin, the medication I would have to take for the rest of my life. She also told me I’d have to have blood tests every month for the rest of my life to check my INR level.

On Monday night, they moved me to B8 South, where I spent the rest of my hospital stay. The days were long, but on the Tuesday, I walked for the first time since my surgery. Family and friends visited during the evenings, which helped to pass the time. On Friday, November 27, things started looking up: They removed my IV and installed my PICC line. Later that day, they removed the pacemaker electrodes and disconnected the monitor. I started to get my hopes up.

The next day, as well as the following Monday and Tuesday, I was allowed to go home for the evening. Unfortunately, almost every time, I would come back with a fever. On the Thursday, we finally got what we’d been waiting for for so long: the results of the antibiotic sensitivity test. Good news—the bacteria was susceptible to the easiest antibiotic to administer! On the Saturday, I was allowed to go home for a visit. I was so looking forward to being discharged permanently! Even though I could now read, walk, etc., and was able to keep busy, I was anxious to be home for good, to be surrounded by my things and see my friends. December 8 was a great day—the Montréal Canadiens visited the hospital. I’d say that was the highlight of my stay, besides from the day I was discharged, which was December 10. Finally! After three long weeks, I was well enough to go home.

My treatment ended on February 9. No more antibiotics! I was ecstatic! On February 23, I had a follow-up in Cardiology, and my next appointment is only in June.

Today, almost four months after my surgery, I’m doing much better. It feels great to no longer be sick and to simply enjoy life! I started dancing again in January and I’m giving it my all. I continue to have blood tests every week, but that’s no big deal.

I’d like to thank the entire staff at the Montreal Children's Hospital, who helped me through my ordeal: Dr.Bernier, who saved my life and to whom I will be eternally grateful; the nurses who took care of me during my stay and who made my days so much brighter—I wouldn't be where I am today were it not for you; the infectious disease specialists who gave me daily status reports; and Dr. Béland, a fantastic cardiologist, whom I will continue to see for follow-up visits.