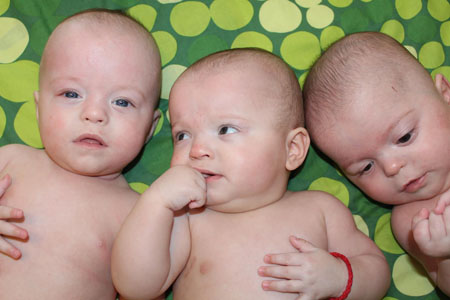 Cristina had a gut feeling from the moment she discovered she was pregnant she may be carrying multiples. “I don’t know why, I just had a feeling,” she says. It wasn’t until she lay on an ultrasound table with a technician by her side, just 5 weeks into her pregnancy that she would know for sure. “The technician was very quiet, and after a few minutes I asked, ‘Do you see two?’ and she turned to me and said ‘No, three!’” The news came as a complete surprise to Cristina and her husband, who had always hoped for a large family, but ever imagined they might have triplets!

“Wow!” was all that came out of my mouth. “I had been expecting two, so three was not too far off!” After the initial surge of emotions, Cristina says she immediately had a lot of questions for her doctor, where she was followed at the Royal Victoria Hospital. Given that she would be carrying three babies instead of just one, she wanted to ensure they were each healthy and safe. “My doctor warned me that one of the risks in multiple pregnancy was pre-term labour, and that we couldn’t know for sure how long I would be able to carry them,” she explains. “But from the moment I found out we were having triplets, I had weekly ultrasounds that showed that all their hearts were beating and they were developing, and I just told myself that despite the risks, we could do this.”

Cristina says her pregnancy went smoothly and she was even able to work until 19 weeks. “I was feeling really good, and didn’t even have much nausea, and was even able to take a flight back to Moldova from 12 to 15 weeks,” she says. “But at my 19-week appointment, my doctor noticed that my cervix had shortened.” Because chances of pre-term labour  increase as the length of the cervix becomes shorter, Cristina’s doctors decided to hospitalize her immediately and place her on bed rest. In an effort to keep her cervix from shortening further, they also performed a small operation to prevent her from going into labour at 22 weeks.

“The goal was to keep the babies developing in utero for as long as possible,” she says. At 24 weeks and 6 days, Cristina says she woke up from a nap to notice she had been bleeding, and doctors reacted quickly, hoping to minimize the chance of any complications. “Within an hour and a half, I had had a c-section and all three babies were born,” she says. Cristina and her husband welcomed two girls, Maria and Sophia, and a boy, Alexandru in the summer of 2013.

Given that they were premature, all three babies were immediately transferred to the Neonatal Intensive Care Unit (NICU), where they required machines to help them breathe and close monitoring by nursing staff. “Some days were good, and the next day something was wrong,” explains Cristina. “They were so small and I was praying that everything would be okay.” One thing that helped give her a sense of purpose during their 4-month hospitalization was being able to pump her breast milk and give it to her babies first from a syringe and later, a bottle. “I felt like the breast milk was a good option because they were so small,” she says. “Gradually they got stronger. Slowly things were getting better. I tried to just take each day at a time, not think too far ahead.” After months in hospital, the day finally came when all three babies could come home. First, one of the girls, and then her son and other daughter werre reunited at home. 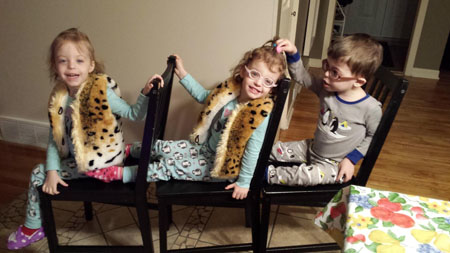 Adjusting to life at home with one premature infant is challenging enough, and Cristina says having three was certainly overwhelming at times. “My husband was able to take five weeks paternity leave at the beginning, which helped a lot because we were still figuring out how to manage everything,” she says. “We also met with the Neonatal Follow-Up team at the Children’s, who showed us everything from how to bathe a premature baby to how to breastfeed, because I had been pumping.”

Cristina says keeping up was the hardest part, and says to allow her a bit of time to rest, her and her husband decided to switch to bottle feeding and worked in shifts to make sure that each baby was fed and changed at the right intervals. “But eventually my husband had to go back to work, and I found that month difficult to adjust to him being gone. Luckily, my mother-in-law came to stay with us for three months afterwards, and helped me a lot,” says Cristina. “that would be my number one piece of advice to parents of multiples is to accept all the help you can get, because it’s not easy doing it all on your own.”

Today, Cristina says Maria, Sophia and Alexandru are in great health and each are developing their own interests and distinct personalities. Maria enjoys drawing, while Sophia prefers dancing and singing, and Alexandru is obsessed with cars. “Now that they’re older, it’s almost like we forget how difficult it was when they were babies!” says Cristina. “I remember wondering when they were little when it would get easier, and we’re already here. Sometimes when they play they will hug each other in a group hug, and it’s the best feeling possible. When I see them in that moment, I know we did a good thing.”