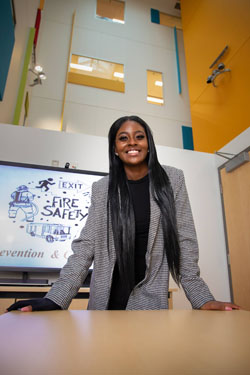 “My whole life changed on June 17, 2018,” says eighteen-year-old Dove Jones-Pierre. She had just finished frying up some french fries, when she headed upstairs to finish her math homework. A few minutes later, the fire alarm went off and she ran downstairs to find the entire first floor covered in black smoke. “I immediately ran to the kitchen, because I had forgotten to turn off the stove,” she says. The pot of boiling oil had caught fire and the flames were about to reach the ceiling.

From bad to worse

Dove tried putting the lid back on the pot to cut the oxygen, but it didn’t work, so she went for the fire extinguisher. It didn’t work either. “I just kept thinking that I didn’t want my house to burn down,” she says. She then grabbed the pot of boiling oil and ran to the front door to throw it outside, but she tripped over the doorframe and spilled the oil all over her body. “I was so full of adrenaline and in shock that I didn’t really realize what had happened. And then I saw my mother’s face,” she says.

While waiting for the ambulance to arrive, she temporarily lost her eyesight, but it quickly returned on her way to the hospital. “The paramedics explained to me that I was in shock and my body was trying to shut down,” she says. “Even though I was in so much pain, all I could think about was that I had to finish my math homework.” She was brought to the Montreal Children’s Hospital, where a team of trauma doctors and nurses were waiting for her. They put cold compresses on her burns, disinfected her wounds and bandaged her limbs and stomach. She had a mix of first, second and third-degree burns, and the most affected parts of her body were her legs and right wrist. “My skin looked like charcoal,” she remembers.

A long road to recovery

Dove spent the next month in the hospital, undergoing various treatments. “I was in excruciating pain for about two months,” she says. “But after that it became more manageable.” Dr. Sabrina Cugno, a pediatric plastic surgeon at the Children’s, also performed a skin graft on Dove. She removed skin from her thighs and applied it to her right wrist and on parts of her legs and feet.

She also met regularly with a physiotherapist and occupational therapist to help her relearn how to walk and write. “Dove had a burn over her right hand and we wanted to make sure she retained movement in her fingers. When scars heal they tend to contract, thus limiting your mobility,” explains Line Parent, an occupational therapist who is part of the Children’s Trauma team. “We worked on different exercises to help her regain her range, strength and function, and suggested different scar management techniques, like massaging her hypertrophic scars.”

Dove was happy that the scar on her face was healing nicely, but she still had major scarring on the rest of her body. To help protect her skin and reduce thick, hard scarring, she began wearing compression garments. “Pressure garments can help prevent and reduce hypertrophic scarring, thus improving their appearance,” explains Line. Dove now wears high-waisted compression pants, because of the burns on her stomach and legs, as well as pressure garments to protect her right arm, right hand, and feet.

In certain badly affected areas, like her right wrist, she also wears a silicone gel sheet dressing, similar to a Band-Aid, under her compression garment. The silicone is used to soften, hydrate and adds additional pressure to the burn scars. Dove also massages her hypertrophic scars twice a day with Vitamin E cream.

Before being discharged from the hospital, Dove began experiencing extreme anxiety about returning home. She would replay the accident over and over again in her head. She had nightmares about the fire and would wake up screaming. Her mother, Indra, tried moving around furniture to make the house look different, and also painted her room. She even bought a new stove and got rid of all the big pots in the house. “I was definitely showing signs of post-traumatic stress disorder,” says Dove.

She began seeing pediatric psychologist, Dr. Maria Sufrategui, a member of the Children’s neuro-trauma team. “Early intervention in these cases is key, because we want to intervene before the problems become chronic,” explains Dr. Sufrategui. “It’s important to provide a safe environment so that patients feel comfortable expressing their emotions, fears, as well as any irrational or catastrophic thoughts.” Dr. Sufrategui helped Dove put things into perspective and gave her relaxation and breathing techniques to help manage her anxiety. “It’s important to deal with all of these emotions, instead of running away from them.”

She also helped Dove realize that even though the fire was an unfortunate event in her life, it didn’t define her as a person. “After the accident I felt really different and I no longer connected with my friends and had a harder time in school,” she continues. “Dr. Sufrategui helped me learn how to reconnect with people again and move forward with my life. This experience has been the hardest thing I’ve ever been through, but in all honesty, it has made me a better version of myself.”

Sharing her experience with others

Dove is now dedicating herself to teaching younger high school students about fire safety and is focusing her final school project on the topic. She’s also teamed up with a fire station to help spread the important message in her hometown of LaSalle. “I think my story will inspire people to take fire safety seriously,” she says. “I hope my message could help save a life one day.”