Waiting for a new kidney 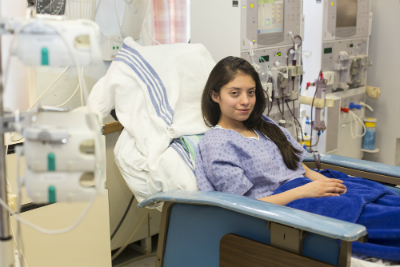 Sixteen-year-old Amayrani remembers vividly the first time she came to the Montreal Children’s Hospital (MCH). She was at a family birthday party when her legs suddenly started to swell. It wasn’t long before her entire body was visibly swollen too. Her mother took her straight to the MCH Emergency Department. “The nurse examined me right away and after taking my blood pressure, she said she’d be right back,” says Amayrani. The nurse returned soon after with several doctors.

The nephrology team at the Children’s diagnosed Amayrani’s condition the same day. She had rapidly progressive glomerulonephritis (RPGN), which can be described as an inflammation of the kidneys that results in severe renal (kidney) failure over a short period of time. The kidney injury can be caused by a process which affects the small blood vessels in particular, which was the case with Amayrani. The disease, called vasculitis, leads to severe damage and widespread scarring of the glomeruli (filters) and the kidneys as a whole. Amayrani had a kidney biopsy which showed that the disease had already progressed so much she needed dialysis immediately.

Amayrani was admitted to the hospital right away and started three consecutive days of hemodialysis, a process that filters the blood to eliminate waste. She was hospitalized for one month before going home; she continues to come to the hospital for dialysis three times a week for five to six hours, which she’ll continue until the day she receives a kidney transplant.

At the end of each dialysis treatment, Amayrani is usually very tired and has a headache. She always has to be careful what she eats, and she’s only allowed 800 ml of liquids a day which includes soups and certain fruits. Some of her favourite foods like tomatoes and potatoes are now off limits. She’s also had to cut back on sports including swimming, which she loves.

Amayrani came very close to receiving her long-awaited transplant in January when a donor kidney became available. Unfortunately she was fighting a sinus infection which meant her healthcare team couldn’t go ahead with the transplant. “You always have to be ready for the possibility of a transplant,” she says, “and be as healthy as possible beforehand.” Despite having to wait a little longer for her transplant, she is philosophical about what happened. “I have to think that everything happens for a reason,” she says. “I’ll get another chance.”

While Amayrani accepts that her week always includes three days at the Children’s, she sometimes finds it difficult not having a typical teenager’s schedule. She still attends school and makes up for lost time at lunch and after class. “When I’m at school, I don’t think that much about the hospital,” she says, “but when I have to miss something exciting at school because of dialysis the next day—that’s when it’s hard.”

A positive outlook and great support from her family and her boyfriend, Eduardo—who sometimes spends afternoons at the hospital with her—are the things that keep her going.

Amayrani hopes to become an interpreter when she’s older. She speaks Spanish, French and English, and has her sights set on learning Italian next. She’s also looking forward to getting back to the pool once she receives her new kidney. “Going swimming again,” she says with a smile. “Yes, that’s something I’d really like to do.”