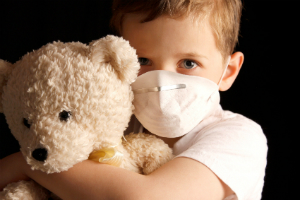 The most effective way to decrease complications and reduce the impact of the flu is to give a preventative vaccine shot. The North American vaccine is developed each year to work against three strains of influenza virus, based on trends seen in the Southern Hemisphere. The best time for vaccination is early October to mid-November.

Certain people are at an increased risk of complications from the flu and should receive the vaccine. High-risk patients who should be vaccinated include those who:

Anyone who is in contact with high-risk populations (including health care workers) should also receive the vaccine. People who are not part of the high-risk groups but just want to avoid the flu can also get vaccinated. If you are currently sick with a low-grade fever, experts suggest that you should wait until you are better before you get the vaccine. If you do not have a fever, you do not have to wait.

Vaccinations are not recommended for children less than 6 months of age because their immune systems are too immature for the vaccine to work properly. People who have an egg allergy, an allergy to thimerosal (a preservative used in the vaccine), a history of allergic reactions to the flu vaccine, or a history of Guillain-Barré Syndrome should not receive the vaccine.

Myths about colds and flus

Myths about colds and flus

There are many myths about what predisposes a person to catch a cold and what makes one person catch more colds than another. Factors that may increase the risk of catching a cold are fatigue, emotional stress, smoking, mid-phase of the menstrual cycle, and nasal allergies. Factors that do not increase the risk of catching a cold include cold body temperature (i.e., being out in the cold), health status, nutritional status, and enlarged tonsils.

Echinacea may help prevent colds, but research studies are not conclusive. Vitamin C does not appear to protect people from catching colds, but it can shorten the duration of a cold by half a day.

The difference between influenza and the common cold

The difference between influenza and the common cold

Both influenza and the common cold are viral respiratory infections (they affect the nose, throat, and lungs). Viruses are spread from person to person through airborne droplets that are sneezed out or coughed up by an infected person. In some cases, the viruses can be spread when a person touches an infected surface (e.g., doorknobs, countertops, telephones) and then touches his or her nose, mouth, or eyes. As such, these illnesses are most easily spread in crowded conditions such as schools.

Influenza is commonly referred to as "the flu." Between October and March each year, between 10% and 40% of people are stricken with influenza. Although most people recover fully, the flu causes approximately 7,000 deaths annually in Canada, mostly among high-risk populations (people with other medical conditions or weakened immune systems, the elderly, or very young children). There are three types of influenza viruses: A, B, and C. Type A influenza causes the most serious problems in humans.

There are over 200 different known cold viruses, but most colds (30-40%) are caused by rhinoviruses. In Canada, the peak times for colds are at the start of school in the fall, in mid-winter, and again in early spring. Children catch approximately eight colds per year, adults catch roughly four per year, and seniors about two per year.

People infected with an influenza or cold virus become contagious 24 hours after the virus enters the body (often before symptoms appear). Adults remain infectious (can spread the virus to others) for about 6 days, and children remain infectious for up to 10 days.

The main complications of the flu and the common cold are bacterial infections of the sinuses or lungs (pneumonia). Symptoms of these complications include fever, chills, and yellow, green, or brown sputum or nasal discharge. Children may also develop ear infections (acute otitis media).

It is appropriate to consult your doctor or healthcare professional if you:

There are a variety of prescription and non-prescription medications that are useful for relieving symptoms and for controlling pain. Please consult your pharmacist or healthcare professional to determine which medication is the right one for you. Antibiotics are not effective for the flu or a cold unless a bacterial infection develops.

Echinacea and zinc have been studied for treatment of the common cold. Evidence for their effectiveness is debatable.

Knowing how viruses spread, it is understandable that the best way to prevent catching the flu or a cold is good hygiene:

There are also lifestyle changes that can help you recover quickly from the flu or a cold: