To pierce or not to pierce… that is the question? | Montreal Children's Hospital

To pierce or not to pierce… that is the question? 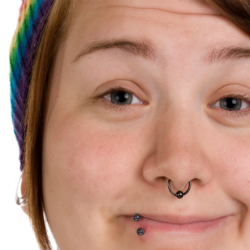 Being well informed is the best policy
by Richard Haber, MD
Recently, I was asked my opinion about body art. The mother of a teenaged girl wished to know whether it was safe or not. She wanted information about possible complications.
This is an excellent question and raises some interesting issues. It’s clear that body piercings and tattoos have spread more widely in our culture and are increasingly accepted by the mainstream. Tattooing and body piercings have a long history in multiple cultures and there’s archaeological evidence for body art going as far back as 60000 BC.1 In Europe the practice of body art died out by the 17th century but started up again among sailors in the 18th century, who often had their ear pierced for an earring. Since this population was generally associated with unacceptable behaviours (alcoholism, brawls, debauchery, rowdyism, etc.), piercings began to be associated with unsavoury characters and criminals.2 Beginning with the punk movement in the 1970s and ’80s, body art has become popular in Western culture and largely socially acceptable. Beginning with ear piercings, it’s become relatively common to see a large variety of body sites pierced, including eyebrows, glabella, nasal septum, nostrils, lips, tongue, face, umbilicus, and male and female genitalia. There’s frequently more than one site involved in piercings.
Risky behaviour

Piercings and tattoos have been associated in adolescents with risky behaviours. One study assessed 484 adolescents aged 12-22 attending an Adolescent Clinic in California. There were 13.2% reported tattoos with 5.25% having more than one; 26.9% had body piercings excluding the ear lobes; and 11.8% had more than one piercing. The most common piercings were ear cartilage (excluding the lobe) – 13.6%; mouth/tongue – 11.2%; navel – 10.7%; nipple – 1.2%; and genitals – 0.8%. Teenagers with tattoos or piercings were more likely to have disordered eating, alcohol or marijuana use, hard drug use, higher scores on a Sexual Behaviour Index measuring age at first intercourse, number of partners and contraceptive use, and higher suicide rates.3

In addition to the behavioural components of body art, there are clear medical complications associated with it. These include infections such as hepatitis B and C, HIV, staphylococcal infections, Pseudomonas infections and others. As well, depending on the body site pierced, there can be complications of bleeding, cyst formation, and dental problems, among others. Difficulties associated with piercing the soft part of the ear can be: infections, bleeding, keloid scars, ear lobe deformity and cyst formation. Nose and ear piercings can be infected with Pseudomonas and this can lead to cartilage necrosis and resultant deformity.4
Contact dermatitis isn’t uncommon, particularly with nickel earrings, but it may occur even with gold earrings. Generally these reactions are mild but sometimes may be more serious causing diseases such as bacterial endocarditis (infection of the heart). One study reported a 30% complication rate from simple ear piercing, the most common being minor infection, followed by allergic reaction. If the cartilaginous part of the ear is pierced there can be destruction of cartilage requiring plastic surgery to correct the defect. The Centres for Disease Control and Prevention lists the practices that need to be followed in order to avoid the infectious complications from piercings and tattoos.(http://www.cdc.gov/Features/Body/Art)
It would be wise to immunize patients against hep B before considering piercings. As well, regardless of the age of piercing, one should only have it done in a facility that uses sterile techniques (see CDC guidelines). If your patient can’t be sure that these guidelines are followed then he or she should avoid that facility and look for one that does.
Mutual consent

What should the age for ear piercing be? There’s no easy answer to this question but as it’s really a cosmetic procedure, should we not wait until the child is old enough to express an opinion and give informed consent? Adolescents are another story, as peer pressure often leads to rash decisions about body art before parents have time to discuss the issue. Sadly, one teen in my practice had a large tattoo done without discussing it with her parents. Now, several years later, she wishes to have it removed but this isn’t feasible without leaving a scar. Older adolescents and young adults going for job interviews have reported wishing that they did not have an obvious tattoo, which led the interviewer to form an unflattering opinion of their application, even if this isn’t justifiable.
Body art has been with us for centuries and will remain but caution should be exercised, particularly with children and teenagers, who may not always be able to give completely informed consent. It’s also vital that the body art be done in a reputable facility following the CDC or similar guidelines.Richard Haber, MD, FAAP, FRCPC is an associate professor of pediatrics at McGill University and the Director of the Pediatric Consultation Centre at The Montreal Children’s Hospital.
Give health. Donate now