Teens and suicide, reading the signs and taking them seriously | Montreal Children's Hospital

Teens and suicide, reading the signs and taking them seriously 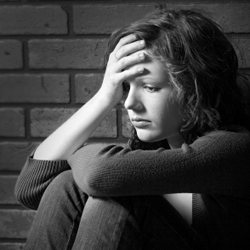 “We currently live in a society that values quality of life over life itself. Simply said, when teens suffer emotionally and things go wrong, those more at risk feel that their life is not worth living”, says Dr. Mounir Samy, psychiatrist at the Montreal Children’s Hospital of the McGill University Health Centre.
The statistics are sad and frightening: in Canada, suicide accounts for 24% of all deaths among 15-24 year olds. In fact, suicide is the second leading cause of death for Canadians between the ages of 10 and 24.(1)
During the months prior to a suicide attempt, teenagers will often show many signs of distress which include difficulty in school, failure to interact with peers and family members and failing in a romantic relationship. They will often try to get help at school or at a clinic.
“If you think that someone close to you may be suicidal, let them know that you are there for them and talk about it openly”, recommends Dr. Samy.
“When a person tells you they are feeling suicidal or shows signs, take it seriously. They are reaching out for help because they trust you”, urges Dr. Samy. Most common signs that a teenager may be depressed and suicidal:

“Suicidal teenagers rarely confide in their parents” says Dr. Samy, “they do however need to feel that their parents are willing to give love and support no matter what”.

At The Montreal Children’s Hospital, a crisis intervention team works in the Emergency Room to help children and teens who are in crisis to recover. They are there 24 hours a day, 7 days a week.