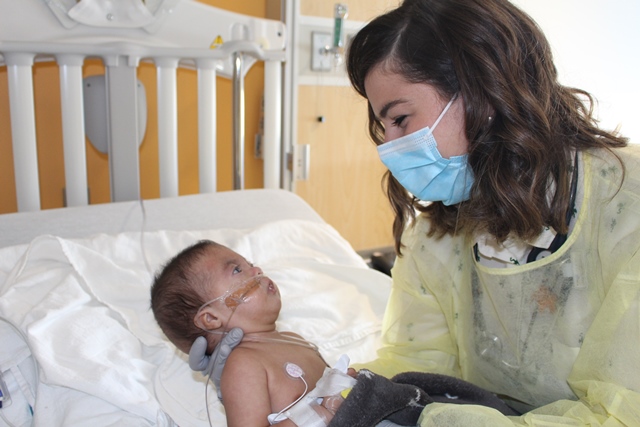 The Northern and Native Child Health Program at the Montreal Children’s Hospital is a team that works closely together, yet sometimes very far apart. The program covers a territory within the McGill Réseau universitaire intégré de santé (RUIS) that includes the Montreal region as well as Northern Quebec, the Cree territory and Nunavik.

The first initiatives of what eventually became the Northern Program began in the 1960s when pediatricians from the Children’s started visiting Baffin Island. “At the time, the program did not serve Northern Quebec which is now our base,” says Dr. Gary Pekeles, who until recently was the program’s director. When the James Bay and Northern Quebec Agreement was signed in 1975, First Nations and Inuit communities gained responsibility for their own healthcare delivery and eventually formed their own health boards. “Montreal became the go-to place for all these communities,” says Dr. Pekeles.

Working with over 20 communities

Dr. Johanne Morel was recently named program director. At the start of her career, when she had just finished medical school, she accepted a short-term position in Chisasibi hospital on the advice of a friend. Within months, she knew she’d found her calling.

Today, the Northern and Native Child Health Program provides consultation and services to more than 20 First Nations and Inuit communities. The program’s pediatricians—Dr. Morel, Dr. Pekeles, Dr. Margaret Berry, Dr. Chi-Minh (Chip) Phi, Dr. Aisling O’Gorman, and Dr. Kent Saylor—provide much of their consultation at a distance but each of them also visits and works in the communities 12 weeks a year. The team also includes Hélène Caron, a nurse clinician, Sue Gennerelli, executive secretary, and Dr. Josée Chouinard who, although not based at the Children’s, serves as a part-time member of the team.

Last year, the pediatricians saw approximately 2,300 patients in their own communities, and admissions to the Children’s were stable at around 300 patients. “The northern communities are fast growing with a higher-than-average birthrate, so the number of patients we see is increasing,” says Dr. Pekeles. “But the fact that admission rates are stable is a good sign that the efforts to build capacity in the community are working.”

Dr. Morel and Dr. Pekeles say that along with building knowledge and capacity, one of the program’s strategic goals is to build stronger partnerships in the communities. “The number of First Nations and Inuit doctors, nurses, therapists, lab techs, and other healthcare professionals hasn’t increased significantly over time,” says Dr. Pekeles. It’s a fact that Dr. Kent Saylor is working to change. Dr. Saylor is co-founder of the Indigenous Health Professions Program in McGill’s Faculty of Medicine to help First Nations, Inuit and Métis students enroll in the health professional schools at McGill. He is also responsible for the Indigenous Health Curriculum, designed to give all medical students a starting point from which to understand health issues of indigenous people. Dr. Pekeles has also worked to develop a distance education program for nurse practitioners in the northern communities to provide greater support to them over the long term.

Continuity of care from home to the Children’s

For some children, the treatments and procedures they need are only available at the Children’s. Given that travel distances are so great, the Northern program team works hard to group appointments for the same visit, and if possible, find ways to reduce the number of required visits to Montreal by conducting follow-up appointments where the patients live. At the Children’s, Hélène Caron organizes the sometimes complex care for children coming to the hospital, and when a specialist from the Children’s makes a trip up north, she works with them ahead of time to ensure that as much as possible, diagnostic tests are done in advance.

Six-month-old Samuel has been treated both at the Children’s and in his home community of Chisasibi. When Samuel’s mother Marlene was pregnant, she and her husband learned that Samuel had a congenital syndrome called trisomy 18 which affects his vision, hearing, musculoskeletal function, development and growth. Samuel was born prematurely at 33 weeks and spent the first months of his life in the Children’s neonatal intensive care unit before going home. In late August, during a visit to Montreal for follow-up tests and appointments, Samuel developed a respiratory infection and was admitted to the Children’s. Dr. Aisling O’Gorman is Samuel’s pediatrician. “One of Samuel’s challenges has been to gain weight, so when he was admitted for the respiratory infection, we took the opportunity to try to further investigate and address his feeding difficulties while he was in close proximity to subspecialists who are not available in their community,” she says.

Dr. O’Gorman is the newest member of the program. “My first exposure to northern communities was during a family medicine rotation in Puvirnituk as a medical student. I loved it,” she says. “It was only later as a pediatrics resident on elective that I met Dr. Saylor, and saw what the Northern Program pediatricians do for their patients, who are so far from home.”

Expanding the definition of pediatric care

Building capacity within the communities also happens outside the hospitals and clinics. Dr. Morel is part of a team which has developed a social pediatrics centre in Whapmagoostui/Kuujjuarapik, the only mixed Cree/Inuit community in the north. “This is an initiative that brings everyone to the table to bring about change,” she says. “So far, we’ve seen 30 children and their families, which often include not just parents but grandparents, aunts and uncles too. It’s an approach within pediatrics that encourages family members to learn how to support their child’s health and well-being.” The project is independent of the health boards and is privately funded. “This type of program requires a community that is open to the idea,” says Dr. Morel. “Part of its success is that it takes into consideration the community’s strengths and values. So far we’ve seen some fairly positive outcomes from it.”

Serving the communities better can also take on other social and cultural components such as Dr. Morel’s decision to approach Paris-based Inalco (l’Institut national des langues et civilisations orientales) about making their course in Inuktituk, the language of Nunavik, available by videoconference. The Institute agreed and the course is now available through telehealth in all 14 Inuit communities. Dr. Morel is one of a handful of people in Quebec enrolled in the course. “Inalco is very interested in protecting languages that are at risk of extinction so their decision to make their Inuktituk course more accessible was something we were very happy about,” she says.