A day in the life of a…cast technician! | Montreal Children's Hospital

A day in the life of a…cast technician! 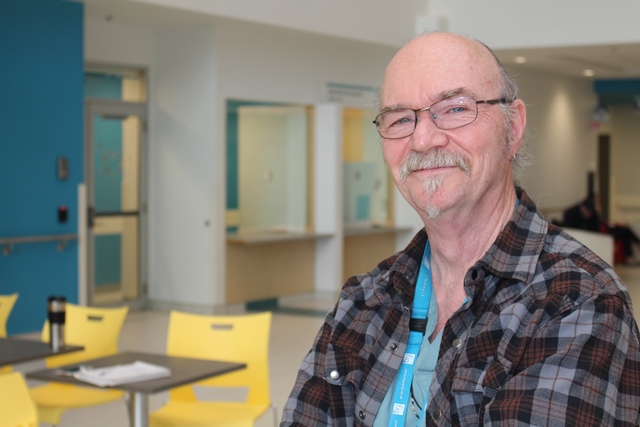 Reg Kennedy has been working with broken bones for 32 years. He is one of seven cast technicians at the Montreal Children’s Hospital. “I started my career as a PAB at the Children’s, but they needed people who could put on casts, so I applied and was trained by George Kafalis, another cast technician with 40 years of experience,” he says.

A typical day starts at 7:00 a.m. and begins with Reg checking in with the Emergency department to determine how many patients need a cast. “Some days I have nobody, while other days I put on casts back to back all day,” he explains. On average, Reg applies five casts per day and each application can take between five minutes to an hour depending on the situation. On slower days, he still works as a PAB for various departments in the hospital. “I definitely do not have a regular schedule,” he says. “I work in different areas in the ED and occasionally visit the orthopedic clinic on the second floor.”

The art of applying casts

Besides being trained as a PAB, Reg also graduated with a Degree in Fine Arts and he still uses these creative skills, but in a different way. “Working in a hospital means you often have to think outside the box,” he says. “Being creative definitely helps.” Like most healthcare workers can attest, every case he comes across is different. “I need to determine the right product, for the right situation, for the right patient,” he explains.

Synthetic casts are the new rage because they come in a variety of colours and patterns, but they don’t work for every situation. These particular casts dry in two minutes and work best with older patients who can sit still while the cast is applied. “I choose which cast to use depending on the fracture and the patient. For example, I wouldn’t choose a synthetic cast for an autistic child because it would be too difficult to apply.”

In these situations, his go-to cast is the traditional plaster cast. A plaster cast is easier to apply because Reg can control how fast it dries. The cast dries when warm water is applied, so if Reg needs more time to get a cast just right he applies cold water to extend the drying period. “Plaster casts are also non-toxic and very flexible. Heck, they’ve been around since the Romans!”

Reg works predominantly in the Emergency department and sees all kinds of patients. In very painful situations, a nurse will have to be called in to put the patient on an IV, while an orthopedic surgeon helps Reg put the bone back into place. “During the cast application process I ensure that the bone doesn’t move after the swelling has gone down and the muscles get smaller. If the bone needs placing, we use traction to align the bones and then we cast and use imaging to confirm everything is in the right place,” he says. In some difficult cases, an x-ray needs to be taken before and after the cast is applied to make sure the bone didn’t move during the application. “We only do this in severe cases and only if necessary because we don’t want to overexpose patients to radiation.”

Some of these more challenging situations can be anything from applying a hip spica, a body cast that immobilizes the child’s hip and/or humerus, or when a patient needs a cast, but also has lacerations that need to be cleaned. “In these cases, I need to cut out a little window in the cast so that I can disinfect the wound,” he explains. “This is challenging because the patient is already in a lot of pain and I have to use a vibrating saw to cut a hole in the cast.” He has also experienced having to put a cast on a very violent patient in handcuffs. “I’ve seen a lot in my career!”

Reg is also responsible for determining which way the arm or leg should be positioned in order to ensure a proper healing process and spends time teaching parents how to care for the cast. “I also show them the x-ray of the broken bone, because the kids like to take pictures of it for their Facebook pages,” he laughs. Reg even follows up with Orthopedics to make sure the patient’s broken bone is healing properly after their one-week check-up. “I like the feedback because I’m constantly looking to improve and get better at what I do,” he says. “I do everything I can to make sure they don’t need a repeat visit.”

Even though a child’s experience in the casting room can sometimes be difficult, Reg does his best to help them get through it. “I always tell them this is short-term pain for a long-term gain.”

Wise words from a cast technician who has applied more than 35,200 casts in his career.