Dispatches from Benin #1: Coming Home to A New Country 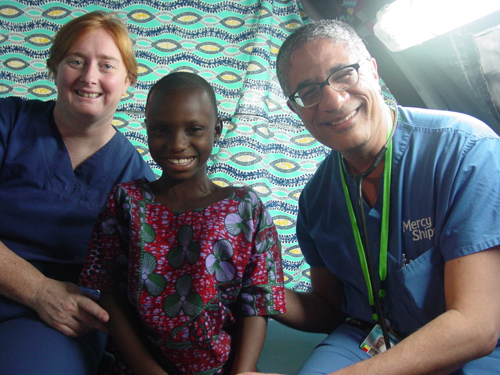 “As I get ready to start my long way back home, I will cherish the vision of mercy I have experienced these last two weeks. And if I can apply that lesson in my own life – among my family, my patients, my colleagues – then I will succeed in keeping part of the Africa Mercy experience within me, until I join this loving community again at a new port in a new country.”

With the words above, I ended my dispatches from the Africa Mercy on March 11, 2016, after my first mission to the world’s largest civilian hospital ship, at the time docked in Tamatave, Madagascar. Less than 10 months later, I am back on the Africa Mercy, this time docked in Cotonou, Benin: a country I’ve never visited, half a world away from Montreal. Yet climbing the gangway and arriving on the Ship feels in every way like coming home. The warmth, compassion, and unconditional love of the staff are as evident as I remembered them these past 10 months.

The arrival is also special because this time I am bringing someone with me, a bright surgical resident with an interest in global surgery, named Yasmine Yousef. I’ve mentored Yasmine since she was a first year medical student, and it has been so gratifying to see her progress. It is the first time a resident from North America has accompanied me on any of my missions, and I am excited about the possibility of continuing to mentor and teach Yasmine, while serving.

We spend a few hours examining patients previously screened by the Ship’s nurses. We encounter a museum of difficult pediatric surgical problems – giant hernias, abdominal wall defects, complex soft tissue masses, rare lesions, and untreated congenital anomalies. But the most challenging patient is a one-year old girl with a giant sacrococcygeal teratoma, a congenital tumor arising from her coccyx, similar to one I removed on my last visit. This patient, however, seems frailer than our previous one. The tumor is ulcerated and bleeding. The patient’s nutrition is poor. She is severely anemic. Her mother, in desperation, has been giving her the only drug she was able to find, aspirin, which further increases her risk of bleeding. Our team – Yasmine and myself, anaesthesiologists from the United States and Canada, a German paediatrician, nurses from Australia, Ireland, and Singapore – huddle to review the case and the challenges. Despite the risks, we decide to proceed in a few days after optimizing her preparation. It will be her only hope of survival.

Following the screening, we meet with the operating room manager and the nurses to organize the schedule for the next two weeks. Tomorrow, we start operating.

Dr. Sherif Emil is a pediatric surgeon and Director of the Division of Pediatric General and Thoracic Surgery at the Montreal Children's Hospital. Over the next 2 weeks, he will be part of the volunteer crew of the Africa Mercy, currently docked in Cotonou, Benin. The Africa Mercy is the world's largest civilian hospital ship dedicated to bringing hope and healing to tens of thousands of the world's impoverished populations.

Dispatches from Benin #2: The Price of Neglect

Dispatches from Benin #5: If it were only for this one

Dispatches from the Africa Mercy