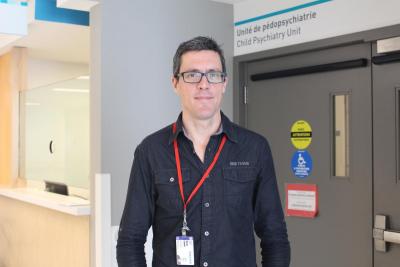 Dr. Martin Gignac is a fast learner. After only a few weeks on the job as the new Chief of Child and Adolescent Psychiatry at the Montreal Children’s Hospital, he’s been able to identify his department’s major strengths and areas of growth. “We have the potential to be international leaders in a lot of areas, and I’m excited to begin exploring this,” he says. “It’s all about putting the right people around the same table.”

Building on an already strong foundation, Dr. Gignac sees great potential in areas like attention deficit hyperactivity disorder (ADHD), neurodevelopmental disorders, transcultural psychiatry, aboriginal health and eating disorders. But his analysis of the department isn’t complete yet. “I’m still getting to know all of our staff and clinics, but I’m already thinking of ways that we can begin collaborating more with our network.”

Dr. Gignac joins the Children’s after spending two years as Chief of Child and Adolescent Psychiatry at CHU Sainte-Justine. He has also spent the last 15 years working as a forensic psychiatrist at the Institut Philippe-Pinel de Montréal, where he still practices one day a week working with children and adolescents with severe behavioural disorders and substance abuse problems.

“As a medical student at McGill University, I was very interested in pediatric medicine and psychiatry, so pediatric psychiatry was obviously a perfect fit for me,” he says. During his residency at Université de Montréal, he was inspired by Dr. Louis Morissette to follow a career in forensic psychiatry. He then went on to complete an additional 18 months of training in pediatric psycho-pharmacology at the Massachusetts General Hospital, a teaching hospital affiliated with Harvard University. “While there I learned a lot about ADHD, impulsivity, mood disorders and substance abuse. It was an amazing learning experience,” he adds.

When he arrived at Pinel, he also became more involved in administration and realized that he had an interest in teaching and research. “I believe strongly in prevention and the great thing about children is that if you work with them early enough you can help prevent certain psychiatric illnesses from getting worse,” he explains. “This will obviously have a direct impact on their future and that is very rewarding to see.”

Dr. Gignac also enjoys his field for its multi-disciplinary approach to healthcare. “We work closely with the psycho-social team, as well as with the education system and youth protection. This helps you learn a lot about your patients from different angles,” he says. “All of this collaboration is extremely important.”

Outside of work, he enjoys running and biking, and has participated in a number of marathons, including an Ironman triathlon. “Let’s just say I know where all the showers are at the Children’s,” he laughs. “Mental health relies on balance, and in order to remain healthy it’s important to do things you enjoy. For me, that’s playing sports and spending time with my family.”