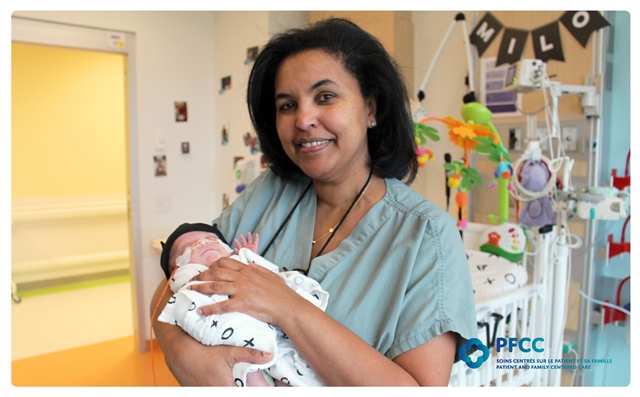 When Anissa Abdelaal talks about her son Milo, she marvels at his strength and determination. She and her husband have seen the extraordinary gains Milo has made so far in his life, one that started much earlier than expected when Anissa gave birth at 25 weeks. Milo weighed only 600 grams, just a little over one pound, when he was born. “To see him today at five pounds is extraordinary,” says Anissa.

Milo’s progress has been steady but he has faced some serious challenges along the way. One Sunday towards the end of September, Milo hit his lowest point. He had developed serious complications with his breathing, and was deteriorating rapidly. Dr. Elizabeth Hailu was on service that day. “Dr. Hailu stayed by Milo’s bedside for five and a half hours,” says Anissa. “Throughout the afternoon, she was extremely focused on him—she knew the signs before they started happening—but she still did everything she could to keep me involved, showing me results of his x-rays and explaining what was happening.”

The next couple of days were harrowing but by Tuesday—when the antibiotics he was given began to take effect—Milo started to improve. “I had known Dr. Hailu before this happened but that day really sticks out for me,” says Anissa. “I felt like she was very in control of the situation, and I saw what an amazing doctor she is.” And that’s why Anissa, on behalf of Milo, nominated Dr. Hailu for the PFCC Star award.

Dr. Hailu joined the Children’s NICU team in 2013 but years before, when she was still in medical school in her native Ethiopia, she had an idea that neonatology would be her career path. “In Ethiopia, the medical training is different to here in that you get to do internship before you finish medical school.” She came to North America to pursue graduate studies, first at McMaster University in Hamilton, and then Columbia Presbyterian in New York where she did her residency in pediatrics and fellowship in Neonatology.

When she first came to Montreal, Dr. Hailu was struck by the generous maternity leave available in Canada—something she sees as a privilege in terms of health policy. She also feels it’s a privilege to work in an environment that offers single-patient rooms to babies and their families, providing a more encouraging environment for parents to develop bonds with their baby. “In neonatology, it’s very important to have parents involved at bedside, and it should be part of what we do. Those of us in the medical community really need to understand what parents go through.”

Dr. Hailu has seen what it means for parents to be part of the process from the first moments. “The more you work in the field, the more you see that what we do medically is just part of it,” she says. “When parents can tell us about how their baby is doing, as well as bond with them, hold them, read to them, talk to them—all these things can make a big difference to their baby’s outcome.”