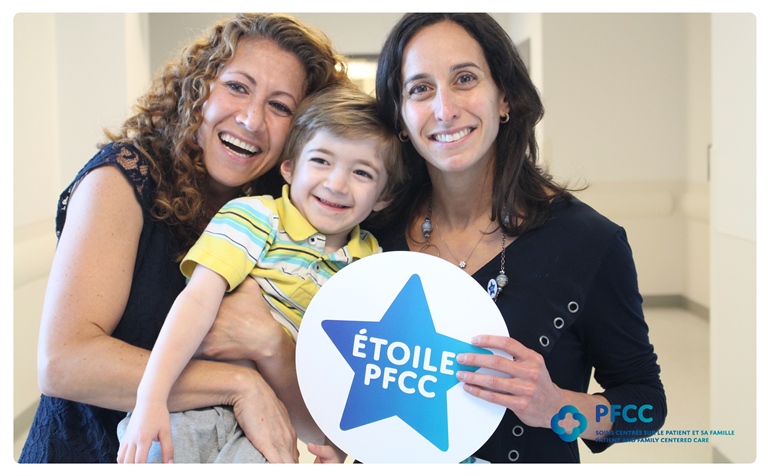 Sandra Filopoulos watched her newborn son Emmanuel undergo surgery and treatments for a heart condition. During Emmanuel’s stay in the Children’s pediatric intensive care unit (PICU), Dr. Samara Zavalkoff was part of his care team. Sandra and her husband Thierry nominated Dr. Zavalkoff for this month’s PFCC Star Award for her dedication and professionalism, and her understanding of the family’s central role in their child’s care.

When Emmanuel was born at the Royal Victoria Hospital, he weighed only four pounds. Sandra, who had worked as a nurse coordinator in cardiovascular research at the MUHC, had an understanding of what was wrong. “He was totally blue,” says Sandra, “and at first they couldn’t intubate him.” Within 24 hours, Emmanuel was transferred to the Montreal Children’s Hospital. He was immediately seen by cardiologist Dr. Adrian Dancea, and one week later, had heart surgery.

Emmanuel was admitted to the PICU after his surgery; Sandra remembers an encounter with Dr. Zavalkoff at a moment when she was feeling very vulnerable. For one week, Emmanuel’s chest was kept open, with the risk that his lungs might collapse. “At one point, Dr. Zavalkoff went to his bedside while they put the chest tubing back in,” says Sandra. “Afterwards, she came to see me and asked how I was doing. She touched my hand and said, ‘It's going to be ok.’ That was when I realized what a connection she has with patients and families.” Emmanuel eventually went home, and returned to the Children’s every two months for follow-up. “I’d sometimes see Dr. Zavalkoff in the hallway, walking with a family as their child was being taken for tests,” says Sandra. “She was never stressed, always calm. That’s a real gift to parents.”

Bringing families to the table

Dr. Zavalkoff is a pediatric intensivist. “Growing up, everything I did outside school always revolved around children,” she says. “When I finished medical school and started to focus on a specialty, I was drawn to critical care because I liked the pace, but also because you can accompany a family through one of the most difficult times in their lives. It’s really an honour.”

The PICU team has long practiced patient- and family-centered care, having included families in bedside rounds for many years. “What’s happening in the PICU now, though, is almost a ‘next’ level of PFCC, with more situations where the family is truly engaged in the process,” she says. “It’s now almost an everyday occurrence that a family tells us something we otherwise wouldn’t have known, and it ends up having an important effect on how we deliver care to their child.”

The PICU’s efforts to continually build on their PFCC approach include a move towards bringing more parents onto committees—and that’s how Sandra became reacquainted with Dr. Zavalkoff. Like many parents, Sandra feels her perspective really changed after living through Emmanuel’s illness. “Everything is still very vivid, and I'll never forget any of it,” she says. Being so grateful to the PICU team is one of the reasons Sandra agreed to join the unit’s Quality Improvement Patient Safety Committee (PQUIPS).

“Sandra is amazing, and perfect for the role,” says Dr. Zavalkoff. “With her professional background and personal experience, she brings suggestions and a perspective that might have been totally overlooked.” Dr. Zavalkoff points out that family representation is now standard for the PICU’s committees, and they’re even looking ahead to ask young adults who were treated in the PICU as teenagers if they’d consider joining a committee. “We’ve seen that family members really feel grateful to have a way to give back in a substantial way,” she says. “They see the concrete ways that their involvement changes things for the next child.”