School Services at the Montreal Children’s Hospital: Teachers help students make the grade outside the classroom 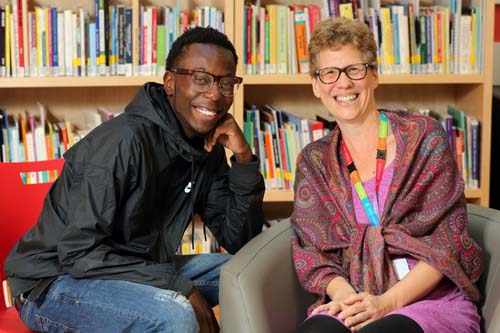 Education Services at the Montreal Children’s Hospital (MCH)  is a small but important department made up of five full-time elementary and high school-level teachers employed by the Commission scolaire de Montréal (CSDM) and the English Montreal School Board (EMSB). Sylvie Dubuc, Sahmadia Bouhend, Katy Desrochers, Peter Tsatoumas, and David Weiss are the teachers who, through education and curriculum, offer our patients a chance to keep some routine in their lives when their days are anything but.

“A kid’s constant in life is school, and because of that, we provide them with a certain sense of normalcy,” explains David. “When you tell a child who’s in hospital that they have to do school work, they very rarely react negatively, and their parents are happy too because it provides a degree of routine and a break from the boredom.”

Lessons outside the classroom

Marvin Cesar has been a patient at the MCH for as long as he can remember. “I was hospitalized as a child because of a heart condition,” he recalls, “and at the age of seven, I started receiving treatment for a kidney condition.” A year and a half ago, at the age of 16, Marvin’s kidney condition meant he had to start hemodialysis, receiving treatments three days a week. The active teen suddenly found himself spending more time at the hospital than at school with his peers. “I remember Sylvie came by and asked if I would be interested in working with her, and I said ‘yes’.”

Sylvie Dubuc came to the Children’s 13 years ago, after spending the previous seven years in Education Services at CHU Sainte-Justine. She compares being a teacher in a hospital to being a school nurse. “You have to adapt. The priority here is the child’s health and sometimes school comes in second, and that’s OK.”

The teachers are part of the support team, says Sylvie. “School contributes to the health of the child because it’s real life, they get a grade at the end of the semester and that gives them a goal and purpose to continue working.” The teachers are often in communication with the patient’s school to see what work needs to be done, which assignments need to be completed, and what exams are coming up so that patients keep up to speed with their peers in their French or English and Math courses. When it came to working with Marvin, Sylvie says, “I wanted him to achieve his potential.”

A moment that won’t soon be forgotten

On May 3, a few weeks before Marvin’s 18th birthday, Sylvie walked into the hemodialysis unit to get to work with him. “He was covered head-to-toe in white blankets and I remarked that he looked like an angel,” she says. “When I asked if he was ready to work, he said he hadn’t been served lunch yet. We both thought it was strange considering it was already 1:00.” The two agreed to postpone the lesson until after Marvin had something to eat.

When Sylvie returned, she learned that Marvin had just received life-changing news from Dr. Martin Bitzan, Pediatric Nephrologist: they had found a match and Marvin was about to receive a kidney transplant. “Soon after I got the news,” recalls Marvin, “they sent me to pre-op, and that same night I received my transplant.”

“Marvin was excited, stunned and radiant; I won’t soon forget the look on his face at that moment. I was so happy for him,” Sylvie remembers. “When I went to visit him in the ICU after his surgery, he was sitting up in bed, looking off in the distance out the enormous window. I remember thinking he looked like a prince contemplating his kingdom. He looked serious and at the same time, at peace.”

The value of a teacher’s support

Their work together did not come to an end after his surgery. Once Marvin was moved from the ICU onto B.07 North to recover, Sylvie and her colleagues continued their lessons with him. For more than a year, through hemodialysis treatments and recovery from a kidney transplant, Marvin worked with his teachers and developed a discipline that paid off. “I passed my year and I am proud of it,” he says.

Marvin acknowledges the important role School Services played in his success, and he is grateful. “I really want to thank my teachers—they were there to help me.” Marvin is still in school and is doing well. Every now and again he sends Sylvie a text message asking her a homework-related question, and she gladly replies. When asked what his plans are for the future, he says, “I want to become a physiotherapist, it’s something that interests me.” He also entertains the thought of maybe, one day, working at the Children’s. 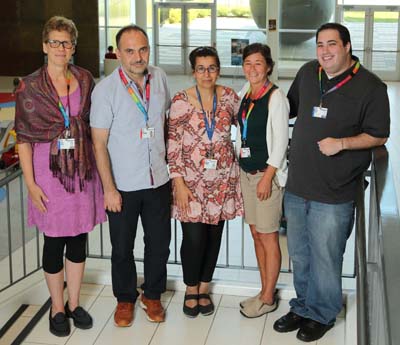 Teaching in a hospital: playing a role in the patient’s rehabilitation

David and Peter, who have been working at the Children’s for three and four years respectively, share what it’s like to teach in a hospital environment. “When you speak to teachers who work in schools, they can appreciate the intricacies of working in a hospital environment and the emotional impact that it can have,” explains David. “You’re working with patients who are not always in a happy situation.”

Both teachers have practiced their profession in the school setting but love this environment. “Some people thrive in the routine of a classroom, I like the fact that anything can happen while I am with a student: residents stop by for rounds, nurses come in to check the patient, clowns pop in...” says Peter. One of the benefits they see to working in such an environment is that they can modify lessons according to each individual. “I like being able to work with kids and give them exactly what they need,” says Peter. “We work with patients one to one and can bring the lesson to their level.”

The work is rewarding, “At the hospital, you’re part of a larger picture,” explains David. “The teachers are part of the multidisciplinary team and I feel like we play a role in the patient’s rehabilitation process, something you don’t get in the classroom setting.”