When your child feels like a lost soul... | Montreal Children's Hospital 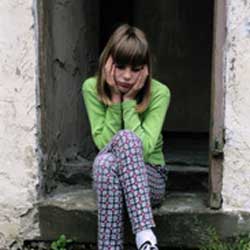 Teen suicide and self-injury on the rise
“A child born today will live to be about 80 years old on average. But the challenge is getting them through 16, 17, 18, 19 – the most hazardous time in their lives. A kid with a car, a kid with a gun, a kid with a bottle – any one of these combinations is much more of a risk than a terror attack or the flu.” +

Children and Anxiety
Some types of anxiety are normal in childhood, such as anxiety in the presence of a stranger; separation anxiety, which occurs between 18 months and 3 years of age; fear of monsters, which appears around 4 to 6 years; and phobias (irrational fears of objects or situations), which are common and disappear on their own. +

Anorexia and Bulimia
Parents have an important role to play in the physical and psychological development of their child. It’s important to have information on eating disorders like anorexia and bulimia. +

Kids' Depression
Depression in the young can be difficult to diagnose. Here are some cues, if you think your child is depressed. +

Carefree Youth? Kids Get Stress, Too
Kids have it made, right? They go to school, play for hours and their parents take care of most of their needs. How much stress could children possibly feel? Surprisingly, plenty. +

Help Teens Triumph Over Depression
Teens are beset by feelings they don't understand. They feel rejection from peers, pressure from authority and doubts from within. Add triggers that might seem trivial to adults -- a breakup with a girlfriend, a low test score, failing to make the team -- and it's little wonder up to one in eight teens suffers clinical depression. +

How to Stay Connected With Your Kids
Your youngster has grown quiet and distant, and you're worried he or she might be stressed or unhappy. Even if you haven't talked in a while, "it's never too late for a parent to approach a child or teenager and try to open the door to an honest exchange." +

Teen Suicide: Learning to Recognize the Warning Signs
Research shows that eight of 10 teens who attempt suicide have given clear warnings of their intentions. +

Teens - Tools for parents
One day you realize that the little boy who played with miniature cars is asking you if he can get a driver’s licence – or the little girl who played with dolls wants you to meet her boyfriend. It’s a fact that your child is becoming a teenager! Here is some helpful advice to help you get through this important, yet sometimes difficult stage of life. +