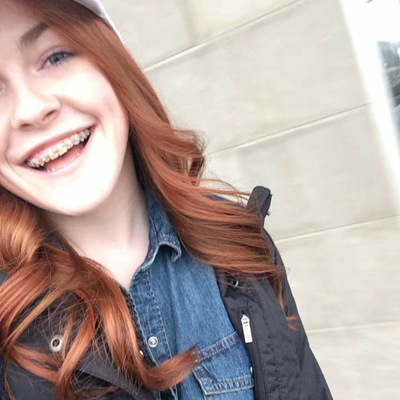 Thanks to expert care from the Montreal Children’s Hospital’s Cystic Fibrosis Clinic, the young dancer continues to pursue her passion

Ashley Midgley’s passion for dancing began even before she could walk. “Her grandmother was a dancer and Ashley loved to look at photos of her costumes when she was a little girl,” says her mom, Heather Rock. “As soon as she was old enough, we enrolled her in dance class and she’s been performing ever since.” Over the years, Ashley’s performances in dance competitions have marked important milestones in her life, not just because of her talent, but due to her ability to pursue her passion while managing a diagnosis of Cystic Fibrosis. It’s a balance that’s not only helped keep her healthy, but provided her a sense of purpose.

“When I first got the news, it felt like the world came crashing down on us,” says Heather, thinking back to 16 years ago when Ashley was just a few weeks old. “She was born a very small baby and had struggled to gain weight in the first 6 weeks of life. She would cry constantly, and we didn’t know why. Initially, our pediatrician suspected a milk allergy. It just wasn’t at all on my radar that she could have Cystic Fibrosis, but at 8 weeks old, a sweat test confirmed she had the condition.”

Cystic Fibrosis (CF), an inherited condition that causes the body to produce mucus that's extremely thick and sticky. “The way I explain it to friends is that it kind of feels like breathing through a straw,” says Ashley. The condition affects a patient’s breathing, but can also cause other related health issues such as asthma, arthritis and fibromyalgia, as in the case for Ashley.

“It was hard to understand at first, and so overwhelming because there was a lot of information to digest,” explains Heather. “But as soon as we met the CF team and Ashley was placed on medication, I felt like I knew what was wrong and that I could do something to help my baby.”

Ashley was prescribed a number of vitamins to help manage her condition, as well as enzymes to help with her digestion – a common complication for CF patients. Heather says she was also taught how to do chest physiotherapy to help ease her daughter’s breathing at home, and eventually introduced a high salt, high fat and high protein diet for Ashley to ensure she was maintaining an adequate weight, as weight loss or difficulty gaining weight is common with her condition.

“In the beginning, when she was first diagnosed, I had so many questions that seemed very urgent at the time,” says Heather. “I was so worried I would be doing something wrong. But thanks to the CF team, I had 24/7 access to someone who would call me back and reassure me, and never made me feel like my question was unimportant. It’s become like an extended family that I know I can rely on, no matter what.”

Ashley also credits the team for helping her get through more difficult periods too. “There are times with my CF will act up and I wake up unable to move and feel like I can’t breathe,” she says. “It can be really frustrating because it’s hard to explain to other people how I can be good one day and bad the next. But the CF team really gets it and they help keep me calm, cool and collected when things start going downhill. When they recommend something to me, I trust them completely because they really understand what I need and have never been wrong in the past.” 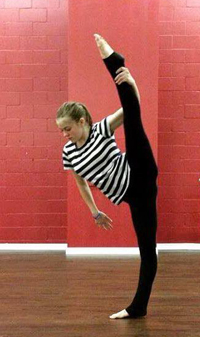 Discovering the world of dance

Now finishing up her last year of high school at St. Thomas High School in Pointe-Claire, Ashley says managing her CF and her related health issues has required her to take things one day at a time. “I’ve learned that it’s just a thing that I have, and I try not to focus on it too much,” she says. “It’s important for me to deal with it without letting it take over my whole life.”

Dance is an outlet that she says gives her a welcome break from managing medications and keeping up with at-home breathing treatments. “When I do dance, I don’t really think about all those things,” she says. “I try to focus on my breathing throughout a performance, but I don’t really feel different from anyone else. It just makes me really happy, and I feel like I’m part of a family. I’m closer to my studio friends than anyone else.”

Whether it be hip hop, contemporary jazz, tap or musical theatre, Ashley relishes in the chance to perform any kind of number, even if it means using all her energy to get through a performance, which can sometimes happen, says Heather. “But we’ve always encouraged her because she’s so passionate about it, and at the same time, it’s a great way to stay active to clear to mucous from her lungs,” she explains. Still, watching her daughter on stage is an emotional experience for Heather, who says it brings her back to when her daughter was first diagnosed. “We didn’t know what the future would hold at first. It’s really special to see her now and know there is so much to look forward to.”

As she plans her future, Ashley is clear on one thing. “I can picture myself being on Broadway, acting, being a dance instructor or makeup artist, as long as there is some link to dance. I want to focus on what makes me happy.” The future for this teen couldn’t be any brighter.