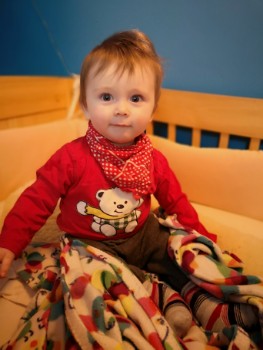 Véronique and her partner, Edgar can still remember the agony of waiting for news as their 3-day old son underwent major cardiac surgery in May 2019. It was a 12-hour day of pacing, walking outside in the rain and trying to distract themselves with Bilboquet ice cream. “It was the only thing that seemed palatable and we huddled in a corner and just ate it in tense apprehension,” she says.

Baby Ernest had been diagnosed with a cardiac malformation when he was still in utero, after a 20-week ultrasound uncovered a coartication (or narrowing) of his aorta and a hole between the ventricles of his tiny heart. “I was being followed up until that point by a midwife,” says Véronique. “All of a sudden we were talking about regular follow-ups at the Montreal Children’s Hospital, about giving birth in a different location. I was devastated and spent two weeks feeling helpless and very pessimistic. I couldn’t work, I was in a very emotional headspace,” says Véronique. “But within a few weeks, we met Dr. Claudia Renaud, pediatric cardiologist at the Children’s. I had the chance to ask my two-pages of detailed questions, and she was able to contextualize everything for us so that we had an idea of the full spectrum of possibilities, given his condition. It wasn’t suddenly better, but it was very reassuring.”

Dr. Renaud went through what Véronique and Edgar could expect during delivery: they may need to deliver in the Operating Room, and Ernest would likely need to be hospitalized for several weeks in the Neonatal Intensive Care Unit. His big brother, 7-year old Léon may not be able to visit him for a while. They wouldn’t know the details of what would happen for sure until he was born and an echocardiogram could show them the extent of the narrowing of his aorta and the hole in his ventricles.

Near the end of May 2019, Véronique went into labor and very happily delivered naturally in the Birthing Centre at the Royal Victoria Hospital, with no need for the Operating Room. “Ernest did very well during the delivery, much better than we were expecting, and he was a big baby, weighing 8lbs 6 ounces,” explains Véronique. “We were able to spend 30 minutes with him before he needed to be transferred to the neighboring NICU so he could be monitored closely.”

His first echocardiogram showed the narrowing of his aorta was significant, and he was immediately put on medication to help ensure optimal blood flow while he awaited life-saving surgery. Dr. Pierre-Luc Bernier, pediatric cardiac surgeon, began the operation three days later and explained that the surgery to correct the two malformations usually took 6 to 7 hours. In Ernest’s case, the operation lasted many more hours after the surgical team noticed Ernest’s pulse was uneven after an initial repair, and decided to embark on a second operation to reconstruct his tiny heart.

At 10:30 p.m. that night, Véronique and Edgar finally got to see their son. He was hooked up to dozens of tubes to help him breathe, and to drain fluid from his lungs, but they were told he was doing very well. “Dr. Bernier came out to speak to us and was all smiles,” said Véronique. “He said he was very satisfied with how the surgery went. We were exhausted but thrilled, we were laughing and crying all at the same time.”

Day after day, Ernest’s recovery seemed to show best-case, textbook-like improvement. Within just 9 days, he no longer needed breathing support, was able to be fed breast milk, and was thriving. “Staff members would come into our room and say they had heard about Ernest all over the hospital, that he was the poster-child of resilience! We were so happy.”

Within 2 weeks, the family was home. Today, Ernest is 8-months old, eats like a champ, sleeps through the night and is thriving at daycare. “He will be followed by Cardiology at the Children’s until he’s 18 years old, and at the Glen site for the rest of his life,” says Véronique. “There are no words to explain how lucky we feel that he has the luxury of getting these services as he grows up.”

“This whole experience has opened our eyes to a world that we knew absolutely nothing about before Ernest came into this world,” says Véronique. “We could have never imagined the kindness and the skill of the individuals who work at the Children’s from Dr. Bernier, to Dr. Renaud, the lactation specialists, nurses, and other health professionals. It’s inconceivable to us that an entire team can heal such tiny hearts. We are so grateful.”