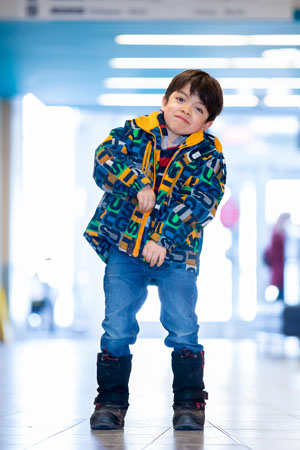 Seven-year-old Lorenzo Bravo is standing a lot taller these days. In the last year and a half, he’s not only grown four inches, but he’s also learned how to fasten his own seatbelt, open doors and climb a full flight of stairs. “These are all things he couldn’t do just a little while ago,” says Lorenzo’s father, Jorge. “It’s amazing how far he’s come in such a short period of time.”

Falling off the growth curve

Lorenzo and his family immigrated to Canada in June 2012 from Lima, Peru. Jorge and his wife, Mariela Paredes, decided to move to Drummondville, Quebec, and quickly started a new life for themselves. As a baby, Lorenzo seemed perfectly normal other than a very rigid walk. But then at the age of four, he stopped growing. “Everyone in my wife’s family is short, so we thought he was just following in their footsteps,” Jorge recalls.

But over the next year, Lorenzo’s fine motor skills stopped developing properly and he became less mobile. The nurse at his school also noticed that something was wrong with his eyes. They looked cloudy. Lorenzo was referred to Dr. Louise Auger, director of the Multicultural clinic at the Montreal Children’s Hospital (MCH). After his first visit, Dr. Auger thought he might be suffering from a genetic condition and sent him for further tests. Her hunch was right.

Lorenzo was diagnosed with an ultra-rare genetic disorder called mucopolysaccharidosis type VI (MPS VI), also known as Maroteaux-Lamy syndrome. He began seeing pediatric endocrinologist, Dr. John Mitchell, director of the MCH’s Endocrinology division and an expert in rare metabolic diseases. “There are only two patients in Quebec with this disease, and 10 in Canada,” he says.

MPS VI is caused by a mutation in the ARSB gene, which in these cases, stops the body from producing an enzyme needed to break down large sugar molecules called glycosaminoglycans (GAGs). “These molecules build up inside cells, which inevitably leads to the inflammation of various tissues and organs, especially those in the musculoskeletal system,” explains Dr. Mitchell. “Without proper treatment, the accumulation of these GAGs can cause cell death.”

Because the disease was affecting different organs and systems in his body, Lorenzo began being followed by a number of different specialties. “My wife and I had to close our company, because we were in the hospital at least three times a week,” says Jorge. “We both wanted to be there for our son.” Jorge’s mother, Mary, had a hard time watching her family struggle from a distance and decided to move to Canada from Chile to help with Lorenzo. “That decision really changed our lives. It allowed my wife and I to go back to school and better our lives,” he says. “We couldn’t do this on our own.”

Not a cure, but close

In 2018, Dr. Mitchell started an enzyme replacement therapy for Lorenzo. Every Monday, a nurse comes to the family’s home and gives Lorenzo a four-hour intravenous infusion. “We’re able to deliver the missing enzyme directly into his body and it begins clearing out the GAGs,” says Dr. Mitchell. “It works best with organs that have a higher blood flow, like the liver.” The treatment doesn’t work as well for organs such as the cornea, which have a slower blood flow. “This therapy is not a cure, but it does change the course of the disease. It affects different organs at different rates, but doesn’t reverse damage already done,” he adds.

For example, Lorenzo had to undergo hernia surgery in 2017, and he still suffers from carpal tunnel in both his hands, for which he’ll undergo surgery in late March and July. Lorenzo did manage to grow two to three inches in six months however, because the therapy helped to reduce the inflammation in his body.  It has also greatly improved his mobility, endurance and fine motor skills. “Lorenzo no longer needs a full-time aide at school and his confidence has grown tremendously. He takes more time to get ready than other children, but he’s able to do everything by himself now,” says his father. "My wife gives us the strength to continue. She is an exceptional mother."

Even though MPS VI is a genetic disorder, nobody else in Lorenzo’s family has the disease, and that includes his younger brother, Leonardo. Both his parents, however, are carriers. It’s a surprising set of odds given his parents’ diverse backgrounds: Jorge’s ancestors are from Germany and Mariela’s can be traced back to China. “Lorenzo’s disease changed our lives forever,” says Jorge. “But it has also brought our family so much closer.”