Growing up with juvenile arthritis 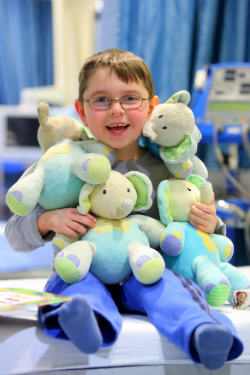 Arthritis isn’t something you’d think a child could have, let alone an eight-month-old baby

Arthritis isn’t something you’d think a child could have, let alone an eight-month-old baby. But when Derek Macri was first brought to the Montreal Children’s Hospital (MCH) five years ago to treat his recurrent fevers and rashes, pediatric rheumatologist Dr. Rosie Scuccimarri delivered baffling news to the infant’s parents: their baby boy had systemic-onset juvenile idiopathic arthritis.

Juvenile idiopathic arthritis--or JIA as it’s commonly referred to--is a chronic autoimmune disorder that affects roughly one in a thousand children and teenagers in Canada. JIA can lead to the inflammation of one or more joints, but in Derek’s case many of his joints and internal organs were affected.

Getting the condition under control has been challenging for both Dr. Scuccimarri, his rheumatologist, and Derek’s parents, Annik and Joey Macri. “We tried multiple standard treatments, including heavy doses of steroid medications. Unfortunately, Derek did not respond to these therapies, and we couldn’t control his condition with them. On top of all this, he experienced a lot of side effects,” says Dr. Scuccimarri.

One of the most noticeable side effects of the steroid medication was facial swelling and poor growth, which made Derek appear heavier than he actually was. He was on a cocktail of medications–as many as 15 drugs when he was just two years old.

“He was lagging behind in terms of his age,” says his mom, Annik. “He was very small for his age and didn’t walk until the age of three. He had a lot of physical limitations because he struggled to move around [due to the arthritis].”

“It was very difficult at first,” says Joey, “it was shocking to see how severe the disease could get.” In March of 2010, the family experienced a particularly difficult period when Derek’s health took a turn for the worse on three separate occasions. He endured periods of lengthy hospitalizations and countless rounds of blood work.

“There were times when his blood test results would come back and the levels were just upside down,” says Joey. “It was really hard.” 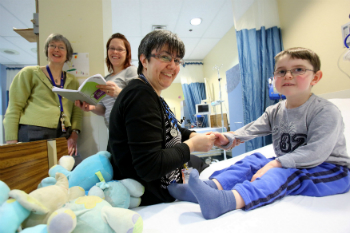 After trying seven different drug therapies in an effort to stabilize his condition—none of which was successful--it was an experimental IV medication that began to show a great deal of promise for Derek. This drug is now standard therapy for patients with severe systemic arthritis.

“We began the treatment in October of 2011 and he showed gradual improvement. We were able to decrease the steroid medication to a negligible dose. By September 2013, he was doing really well,” says Dr. Scuccimarri.

With his arthritis now stabilized, Derek, who is now five years old, has been able to make big strides when it comes to his overall growth and development.

“He had so many physical limitations before this drug – and he still has some – but they are far, fewer now,” explains Joey, who proudly reports that Derek can now do summersaults, hop on one foot and run around with his older brother Jamie – all feats that were impossible before his condition was stabilized.

The family now visits the MCH’s Clinical Investigation Unit (CIU) once every two weeks so that Derek can receive his medication, which is administered intravenously and requires special observation by nursing staff.

“It’s a big day, from 8:00 in the morning to 2:00 in the afternoon,” says Joey, “but we can’t complain. Derek gets spoiled on treatment days. We get the VIP treatment when we come here!”

That VIP treatment often involves special candies from the nursing staff, a spot in the family’s favourite corner of the unit, and a visit with Derek’s longtime companion, Maurice, the adorable stuffed elephant. “Maurice no. 5 stays at the hospital,” explains Annik, “we have four other Maurices in different spots to make sure he’s beside Derek wherever he is.”

While the Macris live a typical family life balancing work and time at home with two young boys, there are a few things that make their daily lives a bit different than most.

Given Derek’s extensive list of medications, Annik keeps a journal, or what she refers to as a “bible”, that lists the names of all the drugs he takes and the dosage amounts for quick reference. She also keeps daily notes about what he ate and the symptoms he exhibited that day.

“It helps us a lot when it comes to keeping track of his symptoms, and making sure he’s eating well and developing well,” says Annik. 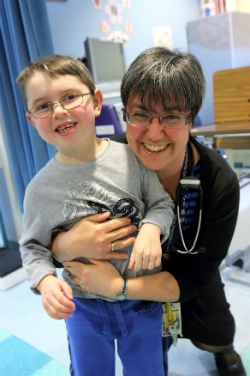 A new lease on life

With their son making exciting progress, the Macris are delighted to have more opportunities to do things as a family, whether it’s day trips to La Ronde or Parc Safari during the summer, or getaways to Niagara Falls.

“We like to do things all together,” says Annik, “our goal is to live as normal a life as possible.”

When it comes to their son’s improving health, Joey says they owe everything to the staff at the Children’s.

“I’m the type of guy that worries about the worst case scenario and so often I’ll ask the same question five times, in five different ways.”

“Our rheumatology nurses, Gillian and Charlene, were patient and answered all my questions every single time I asked. I could call and leave a message on their voicemail and they would call me back within an hour. They’re like an extension of our family,” he explains.

When it comes to Dr. Scuccimarri, the Macris are quick to express their gratitude for her compassion and her resolve to help their son get better. “She’s an angel,“ says Annik. “Simple as that.”

“I can’t put into words everything she has done for us,” says Joey. “There’s nothing we can say to adequately thank her for saving our child’s life.”