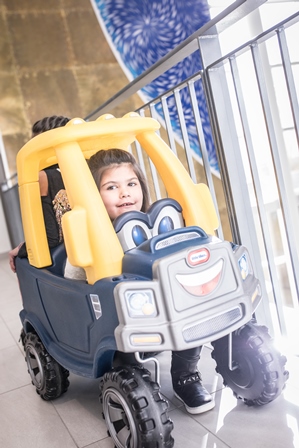 August 29, 2013, started off as a typical day for Linda Florio. She dropped off her two-and-a- half-year-old daughter Tiana at daycare and then made her way over to her other daughter’s new school. It was Giada’s first day of kindergarten. After the school drop-off was done, Linda headed to the dentist and was on her way home when she got a phone call that changed her life forever.

Tiana had fallen while being potty trained and hit her head. The daycare workers called Linda in a panic because she wasn’t responding. “She was rushed to the Emergency department at the Children’s because I thought she had a severe concussion,” explains Linda. But it wasn’t a concussion. It was something far worse.

From bad to worse

Once at the Montreal Children’s Hospital, the ED team ran a few tests and everything seemed normal at first. But then Tiana started seizing in the Trauma room and was sent up to the Pediatric Intensive Care Unit (PICU). “She developed a bad fever and they thought maybe she had meningitis,” recalls Linda. Yet as the day progressed, Tiana started showing other symptoms. She became very aggressive. She stopped walking and talking. She started having these abnormal movements around her mouth.

A few days later, her neurologist, Dr. Bradley Osterman, a neurology resident at the time, diagnosed her with Anti-NMDA receptor encephalitis, an acute and very rare autoimmune neurological disorder. On top of that, she had also developed a severe case of epilepsy, known as secondary refractory seizure disorder. “This type of encephalitis attacks the brain and stops you from developing normally,” explains Dr. Osterman, now a pediatric neurologist and epilepsy specialist working at Centre hospitalier de l’Université Laval (CHUL) in Quebec City. “In Tiana’s case, there was so much epilepsy in her brain that it just stopped functioning and she remained in a vegetative state.”

The family stayed in the PICU on and off for over seven months while the neurology team at the Children’s tried different treatments and medications. At first, she was being treated with steroids, and they seemed to be working, until she developed a bad case of pneumonia and they had to be stopped. “We couldn’t put her back on steroids because of the pneumonia so we tried other options, but nothing worked,” says Dr. Osterman. “This disease and these seizures can usually be controlled with medication, but not in Tiana’s case. She has a very severe case.”

Thinking outside the box

At this point, Tiana was still minimally conscious and was having up to 500 seizures a day. “She was in a world of her own. A bomb could have gone off and she wouldn’t have known,” says Linda. Dr. Osterman had never seen anything like this, especially in someone so young. Between January and March 2014, Tiana received three rounds of chemotherapy as Dr. Osterman tried destroying her t-cells in an attempt to wipe out the antibodies that were attacking her brain. “She started to walk again with a walker, but she was still seizing,” says her mom. “We were so tired of being in the hospital. I couldn’t stand the thought of spending another holiday or birthday there.”

Eventually her doctors were able to discharge her, but Tiana continued to visit the hospital on a monthly basis for chemotherapy and follow-up appointments with Dr. Osterman. He continued to monitor her seizures very closely. “She was still mute and wasn’t developing normally, so I decided to try something completely different.” As an epilepsy specialist, Dr. Osterman had occasionally suggested the Ketogenic diet as a form of treatment for children with hard to control epilepsy. “The diet isn’t for everybody, but it has helped a lot of my patients in the past,” he says. “It had never been used on a patient with Tiana's autoimmune disorder, but it was time to think outside the box.” Linda and her husband, Jason, were hesitant at first, but they decided to try it because they had nothing to lose.

In February 2016, Tiana was admitted to the hospital and put on the diet. “Whenever a patient is put on the Ketogenic diet, we admit them for four days, because it’s quite a shock to the system,” says Marie-Josée Trempe, a nutritionist at the Montreal Children’s Hospital. “Their sugar levels can drop drastically.” The Ketogenic diet has been around since the 1920s and is predominantly used for patients with epilepsy who do not respond to medication. The diet is very high in fat, with little in the way of fruits and vegetables. “We supplement with a lot of vitamins to make sure the patient get all the nutrients they need,” says Marie-Josée.

The human body usually uses glucose from carbohydrates to produce energy, but for children on the Ketogenic diet, their bodies use fat for energy. “Chemicals called ketones are produced when the body uses fat for energy. It gives the brain a different kind of fuel, which for some reason helps to reduce seizures for some people,” explains Marie-Josée. The patient eats enough protein to keep their muscles working, but sugars are severely limited because even an extra green bean can end up leading to an extra seizure.

Every diet is uniquely tailored for the patient and Marie-Josée works closely with the families to make sure they’re comfortable with the process. Everything the patient consumes needs to be measured and the ratio of fats versus protein versus carbohydrates needs to be exactly right. “It was a huge challenge at first, because she’s on the strictest version of the diet,” says Linda. Tiana needs to eat three meals a day, plus two snacks, and each meal must have a ratio of four grams of fat to one gram of protein/carbohydrates.

A typical meal is often made up of four foods: heavy whipping cream, protein about the size of a golf ball, a small serving of vegetables (about five green beans) or part of a piece of fruit (half a strawberry), and a large serving of butter. “Tiana’s favourite meal is natural pork hotdogs dipped in sugar-free ketchup with a little side of vegetables, and lots of mayonnaise, olive oil and cream,” says Linda. “She loves that for lunch!” Other parents whose children are on the Ketogenic diet often swap recipes, but Linda admits it’s still challenging to make sure the ratios are just right. She refers to a website called ketodietcalculation.org to help calculate the ratios based on the grams she enters. “There are resources out there, but they are limited,” she says.

Patients are also followed closely to make sure their bones, heart and kidneys are working properly, and they will only stop the diet once their seizures stop or become well-controlled. Most children are on the diet for two to three years, while some others can be on it for up to ten. Depending on what is causing the epilepsy, sometimes the patient can stop taking seizure medication and the seizures will stop indefinitely, but scientists are still not sure exactly why.

Four weeks after being on the diet, Linda noticed a big change in Tiana. She became more alert, she stopped seizing and started to become herself again. “Even her skin and hair looked better,” she says. “We were starting to get our little girl back.” Dr. Osterman was shocked at how calm her brain looked in the EEG diagnostic tests. In the last year, Tiana has progressed rapidly. “She is developing like a normal child again,” he says. “In the past 12 months, she has gained 12 months of development. I was hoping this diet was going to work, but I didn’t expect it to work this well.” Tiana is now walking, talking and smiling again. She has been seizure-free for over a year and her doctors think she could recover 75 to 100%. “She has the vocabulary of a three-year-old, but she’s back to her baseline,” says mom.

Six-year-old Tiana is still followed regularly by her primary physician Dr. Annie Sbrocchi, a pediatric endocrinologist in Complex Care Service at the Children’s and she and her parents go to see Dr. Osterman in Quebec City every six months. Her healthcare team at the Children’s checks her bloodwork, vitals, as well as her height and weight on a monthly basis to make sure she’s growing and developing properly. “She’s a completely different girl. She used to never make eye contact, or speak or point, and now she giggles, answers you and gives lots of hugs,” says Dr. Sbrocchi. “It’s unbelievable how far she’s come.”